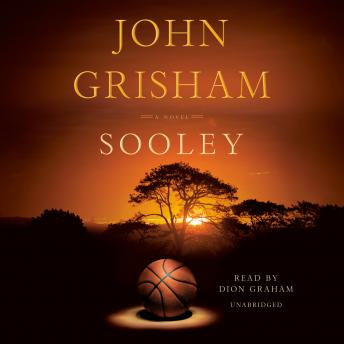 #1 NEW YORK TIMES BEST SELLER • John Grisham takes you to a different kind of court in his first basketball novel. Samuel “Sooley” Sooleymon is a raw, young talent with big hoop dreams—and even bigger challenges off the court.

“Hard to put down ... the pages turn quickly ... building to a climax that won’t leave readers doubting whether this is a John Grisham novel.” —Associated Press

In the summer of his seventeenth year, Sam­uel Sooleymon gets the chance of a lifetime: a trip to the United States with his South Sudanese teammates to play in a showcase basket­ball tournament. He has never been away from home, nor has he ever been on an airplane. The opportunity to be scouted by dozens of college coaches is a dream come true.

Samuel is an amazing athlete, with speed, quick­ness, and an astonishing vertical leap. The rest of his game, though, needs work, and the American coaches are less than impressed.

During the tournament, Samuel receives dev­astating news from home: A civil war is raging across South Sudan, and rebel troops have ran­sacked his village. His father is dead, his sister is missing, and his mother and two younger brothers are in a refugee camp.

Samuel desperately wants to go home, but it’s just not possible. Partly out of sympathy, the coach of North Carolina Central offers him a scholar­ship. Samuel moves to Durham, enrolls in classes, joins the team, and prepares to sit out his freshman season. There is plenty of more mature talent and he isn’t immediately needed.

But Samuel has something no other player has: a fierce determination to succeed so he can bring his family to America. He works tirelessly on his game, shooting baskets every morning at dawn by himself in the gym, and soon he’s dominating everyone in practice. With the Central team los­ing and suffering injury after injury, Sooley, as he is nicknamed, is called off the bench. And the legend begins.

But how far can Sooley take his team? And will success allow him to save his family?

Gripping and moving, Sooley showcases John Grisham’s unparalleled storytelling powers in a whole new light. This is Grisham at the top of his game.

Realistic and fast paced drama of South Sudan refugees. Spellbound by the narrator's description of Sooley's rise in college basketball fame. Somber but realistic ending. A pleasure to hear on audiobooks.

This was not my favorite Grisham novel. It left me a little angry!

Enjoyed audio over reading all this basketball genre!!!

Excellent. Enjoyed the entire book couldn’t wait to get in my car to hear this book

awesome story, such a great listen!

As a John Grisham novel, it’s quite different than the court room/lawyer genre he usually writes. That being said…this is one of the best John Grisham novels I’ve read!!! Keeps your interest all through, exciting and makes you relate with the main character as I haven’t experienced in a long time! Books seldom make me shed a tear, but the involvement you get whilst reading this did! Great, great , book, even if you’re not a basketball person! Loved it!

Worst Grisham novel of all time. An embarrassment.

Excellent! Listened to Sooley on audio and Grisham doesn’t disappoint with the narrators he chooses. A++ great story.

Another great non-legal Grisham. He tells such a good story. I felt like Sooley was real and I was rooting for him as if he was really headed for basketball greatness. The reader was great with the accents, too! I highly recommend!

Loved this book. The narration brought the book to life and I enjoyed every minute of it. I laughed and I cried and I was reminded how truly blessed I am no matter what my situation is.

John Grisham, thanks for taking me on a sad ride, a happy ride, and then a devastating ride. Perhaps a great lesson for up and coming athletes, but I’m going back to your legal thrillers

Great story! Not the typical Grisham book (all of which I’ve enjoyed over the years.) I didn’t expect to like this one (since it’s a basketball story) but was drawn in more and more with each chapter. LOVED IT!

Excellent on all levels

Have you ever been just drawn in loving every minute of a book wanting more can’t stop and then...... and your not sure it was worth it this is that book cause it was different fresh much different emotional roller coaster with a crash so stunning I can’t say if I absolutely loved it or hated it..... wow

I loved it! It was different from most John Grisham books but very good read! If you are not into sports, you may not like the play by play parts but the story is well worth it! I really felt the pain and anguish that Sooley felt being separated from his family during such difficult times. I liked the narrator as well.

Interesting book that kept my attention and eagerness to continue to the end! Shocked at the cruelty of war in Sudan and also shocked at the ending of the book. I so wanted him to make it as a star basketball player because of his dedicated work ethic, but he did save his family and make a lasting impact on all who knew he m or would learn of his life!

I promised myself I would not listen to another Grisham novel because I always was saddened at the end. I thought this one was going to be different until ,,,,

A book for college basketball fans. If you're not a fan of basketball there are portions of the book that might as well be greek. There is so much basketball play-by-play that isn't relevant to the narrative I couldn't enjoy the backstory which might have been interesting.

A good story. Brought the story of Lin Bias to remembrance but a better ending.

Beautiful, heartbreaking novel. A must read

wow it was an awesome book

I'm not a big basketball fan, football is more my home,but this book was amazing. I listened while on a road trip a,d ended every minute of. I could picture Sooley, tall young man making shots from the any place on the court. Smart, young, talented. What an ending!!!. I won't spoil the end , you have to get this book. Make sure you have a box of kleenex handy. Great narrator and wonderful author, John Grisholm never fails to surprise.