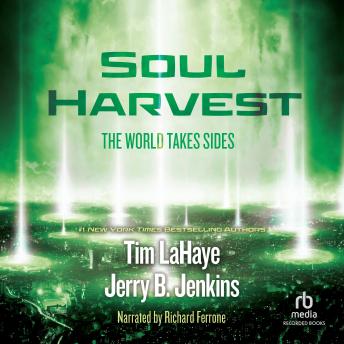 This is the fourth book in the best-selling Left Behind series. Filled with spectacular visions of tribulation and faith, Soul Harvest continues the dramatic saga depicting the fulfillment of Biblical prophecy. Great earthquakes have rocked the earth, destroying millions and leaving widespread devastation. As the Antichrist, Nicolae, sends out his forces to restore order, pilot Rayford Steele finds it increasingly difficult to work for this enemy. His thoughts are with the other believers in Christ, the Tribulation Force. Buck Williams, too, is focused on gathering the faithful together as he desperately searches for his wife, who disappeared in the earthquake. The Tribulation Force has seen much despair and death. But they know that even as the Antichrist seems to grow more powerful, the scriptures speak of a great harvest of souls in the last days. This gripping story of the fight for spiritual truth has captured the attention of millions of readers worldwide. Narrator Richard Ferrone's performance makes it all the more inspiring.

still enjoying this reading of Left Behind.

I really enjoy listening to the Left Behind series!

This was an amazing book, and the narration was suburb!!!