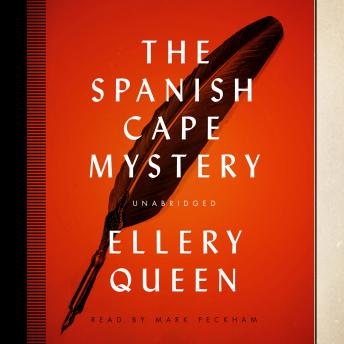 On a seaside vacation, Ellery Queen is ensnared in a trio ofstrange crimes.
Spanish Cape is a dramatic promontory, its rocky cliffstopped with a picturesque hacienda. This isolated spot belongs to millionaireWalter Godfrey and it should be a peaceful family getaway-but one summerevening, Rosa Godfrey argues with her uncle David as he tries to convince hernot to run away with one of their guests, the roguish John Marco. Suddenly, aone-eyed gunman appears out of the twilight. He seems to mistake David forJohn, and forces the pair to the mainland, where he clubs David on the head andlocks Rosa in an empty vacation cottage. The next day, Rosa is rescued by therenowned sleuth Ellery Queen, who had come to the coast for a holiday. For amoment, it seems her luck has changed, but then the universe delivers anothercrushing blow. John has been found stone dead and stark naked. This will not bethe first working vacation for the unfailingly logical Ellery Queen, but tounravel the mystery of the undressed man, he will have to make sense of whathappened on the worst night of Rosa Godfrey's life.

This title is due for release on November 1, 2013
We'll send you an email as soon as it is available!