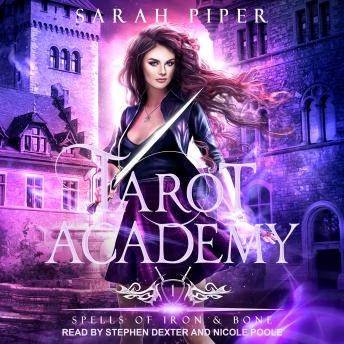 Spells of Iron and Bone

Magick is real. It's also highly illegal-not that I'm worried about that.

Sure, I heal faster than most, and I've got a sixth sense for brewing tea that can fix just about any problem, but my cafe isn't exactly a hotbed of paranormal activity. At least it wasn't . . . until some psycho attacked me and woke up the freaky, forbidden magick inside, earning me a one-way ticket to jail. Now, a covert magickal university is offering me a deal: my freedom in exchange for help with the Tarot prophecies-cryptic predictions they believe hold the key to stopping a deadly apocalyptic plot.

Predictions only I can decipher. Because the witch who divined them? She died years ago. I should know. She was my mother.

All I have to do now is master my crazy powers, decode the doomsday prophecies, outwit a mean-girl coven that puts the psycho in psychic, and survive the temptations of one very naughty professor and three scorching-hot, overprotective mages shadowing my every move.

There's only one problem. If I'm right about the prophecies? Survival isn't in the cards for any of us.

overall a good read is more of a slow burn. I normally don't recommend series as audio books but this is one that I would suggest. Even though you have an overall plot you know is going to grow the arc and plot of the book makes sense as a book and it ends at a good place.

I really liked this story, I was driving 11 hours so this was perfect. Only down point was the male narrator didn't do the female voice very good. I love Nichole poole,but they should have had her do all female voices.

A very fun story with great narrators. Starla is the most main-charactery of main characters: she's the chosen one, needs help unlocking her secret powers to defeat evil blah blah blah. You've seen the same plot before, but this time the main character is a hot woman and there's lots of sexual tension. The biggest names in fantasy have mostly shied away from explicit sexual content so that part was new to me, but certainly not unwelcome. None of that was a dig at the book, I loved it, just like I love eating an entire family-size back of nachos without meaning to. If I had to criticize one thing, and I do because that's who I am, it's that the male narrator's "apparent volume" gets too low at times and I have to crank up the volume to hear him, then crank it down again when they switch.

The story itself pulls you into a different world with many different characters. There's lots of tension between the main characters. However, I felt the magic of the story was shattered by the one narrator. I found she sounded a bit too impersonal, almost automated. The second narrator was a lot better however very light spoken.

It’s light breezy adequately written distraction from the school of romance bodice ripper authors utilizing the modern fantasy genre as a means to escape being pigeonholed in the romance genre and garner some legitimacy as a fantasy author. Unfortunately, this has had the effect of either turning away or making it more difficult to find good fantasy in the midst of all of the cheesy dross; LOTR, The Amber Chronicles, and even the works of Barbera Hambly are classic fantasy, the is difficult to find today. What I appreciate about Hmably is her deft ability to interweave an element of romance into fantasy, while maintaining real character and plot development. This makes her romance elements more truly romantic than merely devolving into soft porn because they arise from genuine connection between the characters. Modernly there are writers like Jim Butcher who maintain some of the dignity of the genre, but I find myself turning more to science fiction for entertaining reading, which transcends what really should be put in the soft porn genre. As for the narrators; the woman is from the standard model nasally, snarky mezzo school of “strong female voice” the guy appears to not know how he found himself here and is making the best of the situation. He isn’t really delivering a “weak” voice, so much as attempting to do a decent job with material that he doesn’t feel any connection to. I listened to it, it was distracting. I believe that the author has the potential to actually write decent fantasy and I wish that she would do so. And Vampires DO NOT SPARKLE.

The book sucks you in with so much detail about magic and whatnot entails . Thinking about that much magic out in the open is astonishing. Most books it is still kept hidden. The flashbacks from her Mom are heart wrenching. I enjoy listening to her grow into her powers and learn more about herself.

I did not like the guy doing the girl’s voice. Was just to wimpy for a strong women. It didn’t flow well being different voices for the same characters