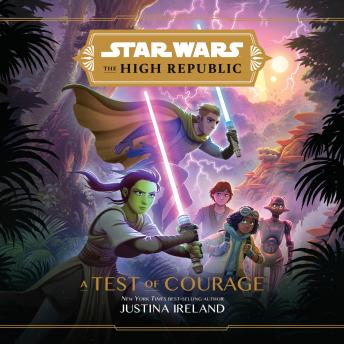 Star Wars: The High Republic: A Test of Courage

Long before the Clone Wars, the Empire, or the First Order, the Jedi lit the way for the galaxy in a golden age known as the High Republic!

Vernestra Rwoh is a new Jedi Knight at age sixteen, but her first real assignment feels an awful lot like babysitting. She's been charged with supervising twelve-year old aspiring inventor Avon Starros on a cruiser headed to the dedication of a wondrous new space station called Starlight Beacon.

But soon into their journey, bombs go off aboard the cruiser. While the adult Jedi try to save the ship, Vernestra, Avon, Avon's droid J-6, a Jedi Padawan, and an ambassador's son make it to an escape shuttle, but communications are out and supplies are low. They decide to land on a nearby moon, which offers shelter but not much more. And unbeknownst to them, danger lurks in the forest?.

Great kids book. Focuses on character over plot, showing how younger people deal with core emotional struggles. Much of the drama comes from youthful introspection and grappling with issues that feel much weightier to kids compared to someone with more life experience. For this reason, older audiences might feel this book is overly simple and uninteresting, but it isn't written for them as it's intended audience. This is similar to an episode of Star Wars: Rebels, and I would primarily recommend this book to any Star Wars fan aged 7-11 years old. older fans will probably still enjoy this as a quick read, but keep your expectations in check.

Yes, it is obviously a YA novel, but it is well written and provides more info and details about the new High Republic era. I, for one, am loving ALL the new content.

Decent book good characters and some development. Followed a predictable path. I feel sorry for people who read this before Light of the Jedi. PLEASE READ LIGHT OF THE JEDI FIRST!!! This was a good story though but it comes off as while the important stuff was going on this was happening. A lot of the stuff that was explained in Light was only briefly mentioned (Legacy Run, Stellan, master skeeer, Nihil, strikes). Hope to see Vern in more stuff and I know she is at least in the comics so maybe she will be in future books. Anything High Republic I’ll definitely read/listen.