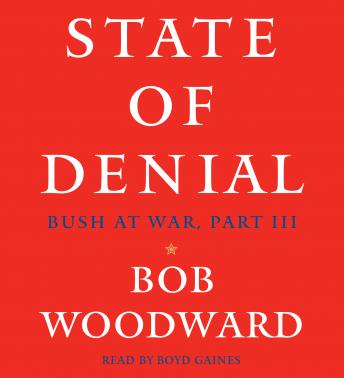 THE DETAILED, INSIDE STORY OF A WAR-TORN WHITE HOUSE

Bob Woodward examines how the Bush administration avoided telling the truth about Iraq to the public, to the Congress, and often to themselves in State of Denial. Woodward's third book on President Bush is a sweeping narrative from the first days George W. Bush thought seriously about running for president, through the recruitment of his national security team, the war in Afghanistan, the invasion and occupation of Iraq, and the struggle for political survival in the second term.

State of Denial answers the core questions: What happened after the invasion of Iraq? Why? How does Bush make decisions and manage the war that he chose to define his presidency? And, is there an achievable plan for victory? After more than three decades of reporting on national security decision making, including his two #1 national bestsellers on the wars in Afghanistan and Iraq, Bush at War and Plan of Attack, Woodward provides the fullest account, and explanation, of the road Bush, Cheney, Rumsfeld, Rice and the White House staff have walked.

Well written and researched book, great narration. It made me want to read the other books he has written about Bush.

The narration was interesting but I had a difficult time following the story at times....It seemed as though the author was struggling with the fact that there was so much pendulum swinging in the characteristics of the players through-out the story. There really was no clear cut "bad guy." I expected to hear a lot of Bush bashing and I am no fan of Bush. However, I have to say that I probably am more sympathetic to his plight after reading the book than before. It seems as though there is so much chaos in our government, it is a wonder anything gets done right at all.

It was nice seeing Boyd Gaines, Pt 2's Narrator, back for this 3rd installment of the ‘Bush At War’ series. His narrating style makes the listener feel as if they are right there in the room during conversations between the characters during this debacle. Throughout the book, Woodward points out players who were in a position to make a stand against the madness in Iraq – people such as Powell, General Gardner, and yes even to some extent, Rice & Card, to name a few. He points out that many of these players were too busy being “Politically Correct”, rather than speak the truth about what was happening on the ground, & what should/shouldn't be done about Iraq. He points out the fear of being labeled “against” rather than “with us”, or of being called ""unpatriotic"", as a root cause. We have dear Rumsfeld and his ilk to thank for this fear. Rumsfeld was painted as the primary broken cog in the wheel this time 'round, though there are many with blame on their hands.

I enjoyed the detailed objectivity of this book. Although I have never been a Bush supporter, this book helped me to see that he's basically a good guy who put himself into a situation that is over his head and beyond his abilities to manage. Bush's eternal optimism, intellectual laziness, and interest in the 'what' not the 'how', is a big reason why we are failing in Iraq and got into this situation. I learned alot from this book about the huge variation between what we hear from the government versus what is really happening over there. And Donald Rumsfeld and Jerry Brenner - boy did they screw things up! But Bush does not hold his team to a standard; he just tells them all that they're doing a great job, and wants them to just be loyal and positive. Listen to this book, you'll learn a lot!

Bob Woodward's 3rd installment in the Bush at War series provides a deeply disturbing picture of George the Second's disfunctional administration. These guys should be leading toga parties, not the "free world." Woodward's somewhat gossipy look at the personalities, behaviors and decisions of the worst president and White House administration in the history of the United States is entertaining, yet distressing. After listening to this audio book, one thought came to mind: to paraphrase a famous quote from National Lampoon's Animal House, "we screwed up, we trusted these clowns!"

I really enjoyed a look into the interworkings of the Bush administration. If you have any concerns about the lack of leadership in this country, you will be outraged as you read this book, but you will also be glad for the information. Often times I found myself yelling at the cd player "I told you so!". If you like President Bush or are a Republican, don't bother renting this book.

Good review of the actions/inaction of the White house administration and Secretary of Defense actions leading up to the Iraq War. It also highlighted the inability of the of both the President, Vice President, National Security Advisor,Secretary of State and SECDEF to recognize the early signs of the counterinsurgency. I particularly enjoyed the analysis of the actions/mis-steps of the Coalition Provisional Authority and Specifically Ambassador Bremer. Good read.

This title is due for release on September 30, 2006
We'll send you an email as soon as it is available!