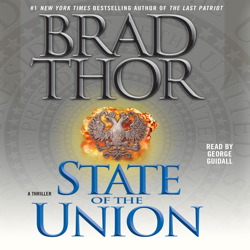 State of the Union

#3 of The Scot Harvath Series

America’s worst nightmare has just become a brutal reality. The most unlikely terrorist enemy of all now holds a knife against the country’s throat. With both diplomatic and conventional military options swept from the table, the president calls upon Navy SEAL turned Secret Service agent, Scot Harvath, to disable a brilliantly orchestrated conspiracy intended to bring the United States to its knees. Teamed with beautiful Russian Intelligence agent Alexandra Ivanova and a highly trained CIA paramilitary detachment, Harvath embarks on an adrenaline-fueled search that spans the world—and leads to a final, deadly showdown on American soil, with a lethal and sinister enemy from the past.

Really enjoyed the book, however the narrator made it very hard to stay in the story his voice was very bland and boring. but Brad Thor has done it again with another great story in the world of Scot Harvath

Whenever I see negative comments about narrators, the narrator has an older voice. I think that is sad. Great narration and captivating book.

Love this narrator, GW has read other novels I also really enjoyed, he’s easy to listen to and enhanced the character’s brillianty.

I love this series, but the narrator doesn’t give the same feel as the previous one. Find it somewhat bland and missing the personality that the first two books nailed.

Enjoyed every moment. A good read.

Scot Harvath is the man that ALL American men should aspire to be!

Good story and well thought out

Great book by Brad Thor love the Scot Harvath series. I think the narrator did a good job overall

I have found a story writer that I really enjoy! I have always been a sci-fi fan, but Brad Thor has opened my eyes (and ears) to a whole new genre! George Guidall is a decent narrator, but he is hard to follow a lot of the time. I have really had my ears spoiled by Armand Schultz! Brad knows how to build the suspense and keep you riveted throughout the book! Can't wait to get started on each new book!

Overall this was a great addition to the Scot Harvath series. It was darker than the first two books but finished strong at the end. The suspense built up held me to the very end which is pretty typical for Thor's writing. The narrator was not my favorite but still quite talented. At the end of the day, I love Brad's writing and this was well worth the listen.

Another Great Book! I am glad I came across this series

I read a few other Mitch Rapp books but didn't know how or why he began doing was he does. Glad to be able to fill in the background. I enjoyed this book and look forward to reading other Mitch Rapp novels.