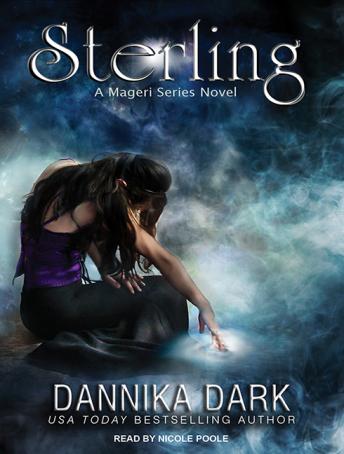 Zoë Merrick lived an ordinary life until late one night, she was brutally attacked and left for dead. She survived, saved by a stranger who witnessed her undergo a physical transformation. That's not the only thing that's different. Zoë is unable to control an unexplainable energy coursing through her body.

Justus De Gradi is a man who can teach her that control. He's handsome, arrogant, and not entirely human. He reveals that she is a Mage-an immortal made of light, not magic. She must now make a choice: Rebuild her life in the human world with the man who saved her, or live with Justus and learn how to use her extraordinary gifts. Justus has sworn an oath to protect her life, but can he guard her from the one man who has a right to claim it?

This is much more of a supernatural romance than an urban fantasy and I really don't much like supernatural romance. That said, the characters were drawn well, the plot well formed and the writing style was good. I would say that this is well written and much better than most of this genre. It was not the right book for me but it was worth the listen. A fan of this genre is pretty sure to love it.

was a good book with a good story.

I loved Sterling. The characters are entertaining. Zoe/Silver goes through so much in this story. I feel in love with Simon.

An intense, gripping story that kept me listening until the wee hours of the morning. Believable characters you will love or hate. Some more than others. This was the first book by this author for me. It won't be the last and hopefully neither will the narrator. I look forward to more works by this duo.

love this book. starting book 2 now. only thing I dont like is how silver has the hots for EVERY guy she sees. thats just too much for anyone lol.

The story line was ok. I like her other book series better and the narrator was good.

This book really dragged on. I like the way the characters were developed. The storyline to could have been wrapped up a little bit faster. The misogynistic world this book is set in can be a little much at times. I did manage to finish the book although I did not love it. I will try the next book to see how I feel if I would finish the series

Interesting story! I listened to the Seven series and want to know more about the other breed stories.

reminds me of the darkness rising books. very good books. I recommend this book if you like those. the narrator was a bit breaky in the beginning but cleared up after a while. cant wait to read book 2.

Good base to series. Twists and turns.

really enjoyed this book definately keeps intrest with the twists

The twist and turns you experience in Dannika Dark’s books are incredible. After listening to the Seven series I fell into this series and now on my way to Interbreed series. I just can’t get enough! Not to mention how they connect to one another. I feel a part of this world. Nicole Poole is who drew me in with her exceptional skills. When your listen to Nicole you forget it’s one person reading to you. I have to say I am extremely picky with the voices of the narrators and Nicole has got me hooked. Could have been a better pair.

Another great series by Dannika Dark! I can't wait until the next book.

I absolutely love this series!!! Unfortunately, I read the Seven series first not realizing the connection. But once I started the Mageri series, I didn't care...Love love love Dannika Dark....and Nicole Poole, what can I say??? After listening to all of Dannika's books, I searched out other books Nicole Poole narrated...not disappointed... Excellent reads, excellent narration.

I Loved the whole story so much. Each book builds on to the next. I fell in move with all the characters and their flaws. I highly recommend the entire series!! You won't regret it.

This title is due for release on June 9, 2014
We'll send you an email as soon as it is available!