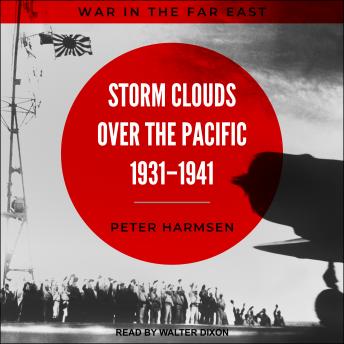 War in the Far East is a trilogy of books offering the most complete narrative yet written about the Pacific Theater of World War II, and the first truly international treatment of the epic conflict. Historian Peter Harmsen weaves together a complex and revealing narrative, including facets of the war that are often overlooked in historic narratives. He explores the war in subarctic conditions on the Aleutians; details the mass starvations in China, Indochina, and India; and offers a range of perspectives on the war experience, from the Oval Office to the blistering sands of Peleliu.

Storm Clouds Over the Pacific begins the story long before Pearl Harbor, showing how the war can only be understood if ancient hatreds and long-standing geopolitics are taken into account. Harmsen demonstrates how Japan and China's ancient enmity led to increased tensions in the 1930s, which, in turn, exploded into conflict in 1937.

The battles of Shanghai and Nanjing were followed by the Battle of Taierzhuang in 1938, China's only major victory. A war of attrition continued up to 1941, the year when Japan made the momentous decision to pursue all-out war. The infamous attack on Pearl Harbor catapulted the United States into the war, as the Japanese also overran British and Dutch territories throughout the western Pacific.