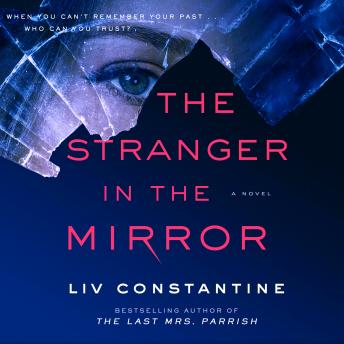 The Stranger in the Mirror: A Novel

A diabolically twisty, psychologically unsettling novel about a woman with no recollection of her past from the authors of the Reese Witherspoon Book Club pick The Last Mrs. Parrish and The Wife Stalker.

'Jaw-dropping twists with an unsettling edge that you’ll need a few days at the beach to recover.' —Reese's Book Club

Addison’s about to get married, but she’s not looking forward to the big day. It’s not her fiancé; he’s a wonderful man. It’s because Addison doesn't know who she really is. A few years ago, a kind driver found her bleeding next to a New Jersey highway and rescued her. While her physical wounds healed, Addison’s memory never returned. She doesn’t know her real name. Or how she ended up injured on the side of a road. Or why she can’t shake the notion that she may have done something very, very bad . . .

In a posh home in the Boston suburbs, Julian tries to figure out what happened to his loving, caring wife, Cassandra, who disappeared without a trace two years ago. She would never have left him and their seven-year-old daughter Valentina of her own free will—or would she?

As these two lives intersect, The Stranger in the Mirror hooks readers with riveting drama, told with Liv Constantine’s hallmark blend of glamour, tense psychological thrills, and jaw-dropping twists.

This book was fabulous!!!! However I feel like if I tell you any more than that I will spoil something and you definitely want the pleasure of how this story unfolds! Fabulous narration by Suzanne Elise Freeman, Maggi-Meg Reed, Jeremy Arthur! 4 stars

This novel is a DIRECT RIP OFF of Dean Koontz's "False Memory". The author even MENTIONS DEAN KOONTZ IN THE BOOK!!! This book is also much, much worse than the original and has a cliché main character. I honestly can't even believe that Liv Constantine got away with publishing this novel considering it's a VERY close copy to Koontz. I was a big fan of Constantine before this novel since I really liked her other books, but I'm appalled that she copied another famous psychological thriller (and did a poor job of it, too).

Good listen! Enjoyed the twists, and the narrator. The ending wasn’t my favourite, but overall 4 stars.

Enjoyed the narration and the suspense.

This is a great book with twists and turns. Wonderful psych thriller!

This book had a lot of unrealized potential. Promising start that faded to disappointment rather quickly.

OMG!!!!! I loved this book. I highly recommend this book. I could not stop listening. There are such twists that I actually yelled OMG out loud!!

I just spoke with awesome from start to finish. The first time I

Was tough to follow at the beginning, kind of boring plot throughout

This was my least favorite of her books so far. it was good, but I found myself drifting off and my attention not being captured as much as her other books. The story line is interesting enough... I am not sure if it was the narration or not? It was definitely worth a credit but I was underwhelmed compared to this authors others.