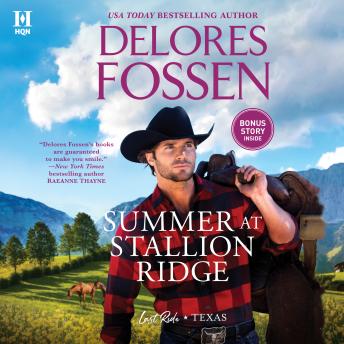 Can two old friends rekindle the spark that brought them together when their pasts are littered with land mines?

The chance to be near his young son is the only thing that could entice former SWAT commander Matt Corbin back to his hometown. Matt has only a few happy memories of his tough childhood in Last Ride, Texas, and most of them involve Emory Parkman. Once his teenage crush, she’s now living in a cottage on his late grandfather’s ranch, which seems like a good omen…until Matt learns Emory is looking into his family’s history, a subject he’d prefer remained closed.

Emory’s wedding-gown designs are said to bring luck—to everyone but her. Though twice bitten by romance that went sour, she’s tempted to take a chance on the rancher next door. Emory and Matt’s long-ago attempts at love never got a fair chance, but all these years later, their attraction is stronger than ever. Maybe by unearthing some of his ancestors’ long-buried secrets, she can help him finally cast off the past’s shadows and prove to Matt that the third time’s the charm.

This title is due for release on March 29, 2022
We'll send you an email as soon as it is available!