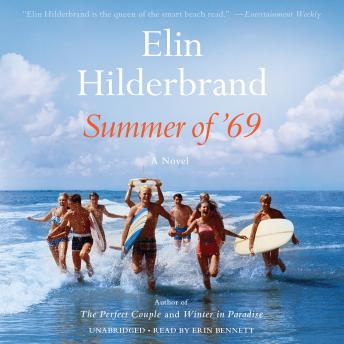 Four siblings experience the drama, intrigue, and upheaval of the '60s summer when everything changed in Elin Hilderbrand's #1 New York Times bestselling historical novel.
Welcome to the most tumultuous summer of the twentieth century. It's 1969, and for the Levin family, the times they are a-changing. Every year the children have looked forward to spending the summer at their grandmother's historic home in downtown Nantucket. But like so much else in America, nothing is the same: Blair, the oldest sister, is marooned in Boston, pregnant with twins and unable to travel. Middle sister Kirby, caught up in the thrilling vortex of civil rights protests and determined to be independent, takes a summer job on Martha's Vineyard. Only-son Tiger is an infantry soldier, recently deployed to Vietnam. And thirteen-year-old Jessie suddenly feels like an only child, marooned in the house with her out-of-touch grandmother and her worried mother, while each of them hides a troubling secret.
As the summer heats up, Ted Kennedy sinks a car in Chappaquiddick, man flies to the moon, and Jessie and her family experience their own dramatic upheavals along with the rest of the country. In her first historical novel, rich with the details of an era that shaped both a nation and an island thirty miles out to sea, Elin Hilderbrand once again earns her title as queen of the summer novel.

Enjoyed the the characters but felt I wanted a bit more of each of their stories. Excellent reader.

Another page turner from Elin!!

Not one of my favorites.

Loved it! Great read, and was sad to see it end . Loved all the characters , as well as the story line. Easy, light, read

Loved it, every part of it. Fun read, great characters!

The story is light, light, light. There is no depth here but if you want a "beach-read" that is even less profound than most, this is for you. The narrator is very good, she is far better than the story. I thought that the inclusion of the Mary Jo Kopechne incident was cheap and trite.

It was a nice light read. Nothing in-depth. I know this is silly, but the narrator reading he said or she said. Really annoyed me. This is the first audio I have read that has done that.

I graduated from high school in 69, am a huge fan of music of the era, had twins and had a home in New England, so I related to lunch of this book. I enjoyed every minute! It was excellent!!

Very shallow writing and I simply didn’t care about the characters. Weak plot. Twice I fast forwarded 2 hours and didn’t miss anything. If I hadn’t had to read this for a book club I wouldn’t have finished it.

Very superficial, did not capture the tumultuousness of those times at all. Very much romanticized, lots and lots of white washing. Too many children sent to die for no reason and before their brains are even developed sufficiently to understand what is being asked of them and what the consequences will be.

A terrific summer read. Highly recommend this book that is close to reality in location and year events.

I related more to Blair’s pregnancy (I’m a mother of twins) than to the interpretation of the times.