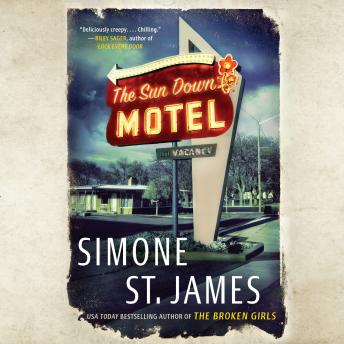 The Sun Down Motel

Something hasn’t been right at the roadside Sun Down Motel for a very long time, and Carly Kirk is about to find out why in this chilling new novel from the New York Times bestselling and award-winning author of The Broken Girls.

Upstate New York, 1982. Viv Delaney wants to move to New York City, and to help pay for it she takes a job as the night clerk at the Sun Down Motel in Fell, New York. But something isnʼt right at the motel, something haunting and scary.

Upstate New York, 2017. Carly Kirk has never been able to let go of the story of her aunt Viv, who mysteriously disappeared from the Sun Down before she was born. She decides to move to Fell and visit the motel, where she quickly learns that nothing has changed since 1982. And she soon finds herself ensnared in the same mysteries that claimed her aunt.

I loved this book! It was really entertaining!

I enjoyed this book a lot. The ending wax predictable, but it was fun read

Great read! I enjoyed from beginning to end.

I loved the book from beginning to end. The ending is very interesting.

One of my favorite books in a long time! Continually wanted to listen!

Suspenseful with great characters! Narrators were great as well.

This is a great book. A little “chick flicky” in some places if your a fella, but interesting from start to finish. Good characters, very well read from both narrators. It’s not spine tinglingly spooky but it’s almost realistic spooky. You’ll see what I mean if you listen to it. it. It’s well worth the money. Good ending too. Always a bonus.

Loved this book. Couldn’t put it down.

This book is one that keeps you interested. It’s like listening to good gossip...you want to hear the story....but it does not stress you out. It was nice not to wade through worthless gun fights, huge body counts, and characters who could out do super man. Simple people...with not so simple problems. My thanks to the author for giving me something to enjoy reading. To the Narrators...you were great! Ten plus if you ask me!

I thought it was a great story! Kept my attention.

I loved this story from start to finish. Amazing twist, suspenseful, and exciting! Definitely recommend this for any true crime lovers.

Brilliant story weaving across multiple decades involving a serial killer, motel hauntings, and a girl on the quest to find the truth. The narration is flawless.