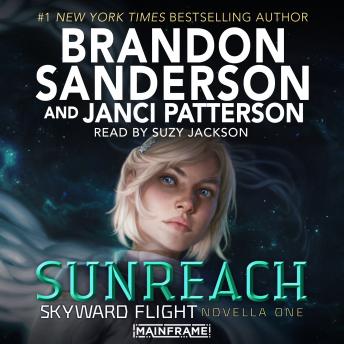 #1 of The Skyward Series

From #1 bestselling author Brandon Sanderson and Janci Patterson comes the first of three Skyward series novellas, each told from the perspective of a different member of the team back on Detritus. Read FM's story between Starsight and Cytonic.

When a planet-destroying Delver suddenly appears in the sky of Detritus and vanishes just as suddenly, FM knows that the last free human society got lucky. Her Skyward Flight companion, Spensa, figured out how to draw this Delver away, but it won’t be so easy next time.

The forces of the Galactic Superiority will be back—and if the Defiant Defense Force can’t figure out a way to escape the planet, humanity’s destruction is only a matter of time. Spensa’s mission to infiltrate the Superiority unveiled the secret to their hyperdrives—a cytonic slug species called the Taynix. Now FM’s flightleader, Jorgen, has found a large group of Taynix hiding in the caverns far below Detritus’s surface.

FM and Jorgen must work together with the engineer Rig to awaken the mysterious alien Alanik and unlock the powers of the Taynix, or humanity will be trapped. With Spensa’s friend Minister Cuna of the Superiority stranded at the outpost of Sunreach, they need to figure out how to rescue them—or the Superiority government will be in the sole clutches of those who want to wipe out Detritus once and for all.

I have gotten "caught up" in the very enjoyable escapism of Brandon Sanderson's fantasy tales! It was fun to listen to a shorter novella, that is part of the new "Skyward Flight" series that was co-written by another rising author. It "fit," yet was unique in its presentation. In addition to the fun story themes, characters, and team building themes, I appreciate the strong warrior females that are part of this series. --Inspiring and fun!