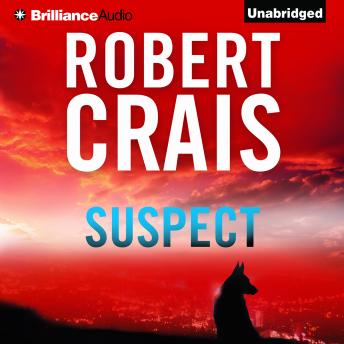 For twenty-five years, Robert Crais has written extraordinary novels of crime and suspense. He is “a master of crime fiction” (Associated Press); “his novels get better with every new book” (Portland Oregonian); “Crais is hands-down the world’s greatest crime writer” (The Huffington Post).But in Suspect, he may have written his most remarkable novel of all.LAPD cop Scott James is not doing so well, not since a shocking nighttime assault by unidentified men killed his partner Stephanie, nearly killed him, and left him enraged, ashamed, and ready to explode. He is unfit for duty—until he meets his new partner.Maggie is not doing so well, either. The German shepherd survived three tours in Iraq and Afghanistan sniffing explosives before she lost her handler to an IED and sniper attack, and her PTSD is as bad as Scott’s.They are each other’s last chance. He was a young cop on the rise, she was bred to guard and protect. Now they are shunned and shunted to the side. They are suspect. And together they will set out to investigate the one case that no one wants them to touch: the identity of the men who murdered Stephanie.Nine months and sixteen days later, they remained free. They were still out there.What they begin to find is nothing like what Scott has been told, and where it will lead them will take them both through the darkest moments of their own personal hells. Whether they will make it out again, no one can say.Thrilling, emotional, intense, with some of the best characters and well-crafted writing in all of crime fiction, Suspect is further proof that “Crais just keeps getting better” (Publishers Weekly).

Loved this audio book. You would to if you're a dog lover. So much insight into a dog's abilities. The narrator was excellent.. love a book with a good ending.

Loved this audio book. You would to if you're a dog lover. So much insight into a dog's abilities. The narrator was excellent.. love a book with a good ending.

This was a really great story, with a really great narrator! I had never heard of Robert Crais before and I will definitely be looking up more of his books, as well as those narrated by MacLeod Andrews. The characters were really well developed and the storyline was good. I liked this book because it was unique; definitely a memorable read because it touches the heart.

OMG what a beautiful story. One of the best I have listened to in a while. Will be reading more of his books. Thanks for a great listen

Wow, this is my first Robert Crais book but I am already ready Demolition Angel. OMG I feel in love with Maggy and want to own her. I don't know how to explain the joy this book brought me...what I can say..READ IT! Thank you for a wonderful story and 2 characters that will live long in my heart!

Terrific! I couldn't stop listening. The story was gripping and the narrator was exceptional. I'll look for other books by this author and will put this narrator at the top of my list with Dick Hill and George Guidall.

Loved it! Touched my heart. Now I want to read all his novels and am working towards that goal.

This title is due for release on January 22, 2013
We'll send you an email as soon as it is available!