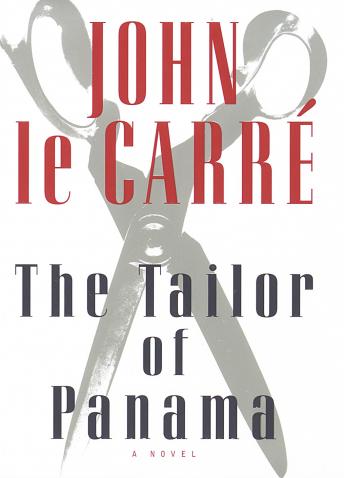 The Tailor of Panama

"Le Carre remains far in front in his field, a startlingly up-to-date storyteller who writes as well about the shadows around the power elite as anyone alive."
-Publishers Weekly

Le Carre's Panama is a Casablanca without heroes, a hotbed of drugs, laundered money and corruption.  It is also the country which on December 31, 1999, will gain full control of the Panama Canal.

Seldom has the weight of politics descended so heavily on such a tiny and unprepared nation.  And seldom has the hidden eye of the British Intelligence selected such an unlikely champion as Harry Pendel - a charmer, a dreamer, an evader, a fabulist and presiding genius to the house of Pendel & Braithwaite Co. Limitada, Tailors to Royalty, formerly of London and presently of Panama City.

Yet there is a logic to the spies' choice, for everybody who is anybody in Cental America passes through Pendel's doors.  He dresses politicos and crooks and conmen.  His fitting room hears more confidences than the priest's confessional.  And when Harry Pendel doesn't hear things as such - well, he hears them anyway, by other means.

In a thrilling, hilarious AudioBook, le Carre once again effortlessly expands the borders of the spy story to bring us a magnificent entertainment straight out of the pages of tomorrow's history.