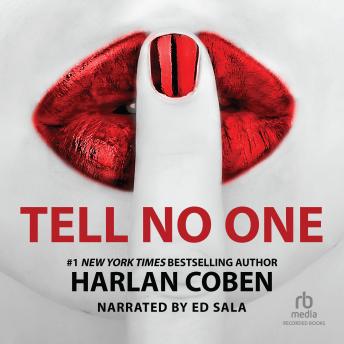 Critically acclaimed, best-selling author Harlan Coben has won the Shamus, Anthony, and Edgar Awards during his impressive career. Tell No One is an irresistibly suspenseful thriller infused with nail-biting tension and packed with shocking plot twists. It has been eight years since Dr. David Beck's wife, Elizabeth, was murdered by a serial killer. When Beck receives a message containing a phrase only Elizabeth should know, he is tormented to tears. Either someone is playing a sick joke, or the wife he's never stopped loving is still alive. He's been warned to tell no one, and as the desperation of his search for the truth intensifies, he heads straight toward a deadly secret. Coben tempers the drama with dashes of sly humor and a cast of unforgettable characters, including a bare-hands assassin, a glamorous plus-size model and a drug dealer with a soft spot for Dr. Beck. Listeners will relish Ed Sala's exhilarating narration.

Slow in some places, and not as exciting as I had hoped, but still a good storyline with interesting characters.

I thought the story development was excellent. It avoids cheap traps and the story ties itself together in a enjoyable manner. Great read.

always a great read by Coben!! he's one of my most loved writers!!

This book was amazing to say the least!! Harlan is beyond a talent writer and I loved narrator! There were so many twists and turns. I could not recommend this book enough!!

I love HC…I have read or listened to all of his standalone books with the exception of the last 3 published books and this story is as excellent as any other HC novel. However, the narration was so horrible and Ed Sala should be ban from being a narrator. He made the story so unbearable for me that I needed to finish it by ordering and reading the print (which is fine because I like to do old fashion reading but it didn’t help me on my commute). By far one of the worse narrations and I have had my fair share. If you need help falling asleep then I do recommend Ed Sala because he will get the job done.

Great read. Lots of twists and turns. Keeps you wondering the whole time.

Although I have seen Harlan Coban movies and Series on Netflix, this was my first to listen to. I enjoyed the mystery and the character development in the story. The ending was different than I expected. I enjoyed the narrator very much.

It had so many twists and turns that it kept me on the edge of my seat. And the end I did not see that coming great story!!!!

The author appears quite racist and homophobic!!!

well it was a nice listen. I didn't like the narration much tho. the book is definitely a 3.

It was a very good novel. I really liked the story.

I loved this book and the narrator I thought he did a really good job. I would love to listen to another book with the same narrator. .

I don't get the accent as much Asian as it was regional. enjoyed the book very much. and thought the reader did a great job.

Good story that will keep your interest all throughout. Narrator was good, except his Asian accent was a little annoying. But that's a small portion of the story. ;)

This title is due for release on February 17, 2012
We'll send you an email as soon as it is available!