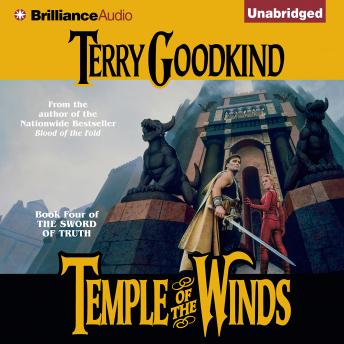 Temple of the Winds

#4 of Sword of Truth Series

Book Four of The Sword of Truth—the series first begun in Wizard's First Rule—returns listeners to the world of Richard Cypher, a simple woods guide who never dreamed he would be named the Seeker of Truth and become caught up in magic, war, and dangers so extraordinary that the fate of his entire world would hang on his actions and decisions.The dangerous, fanatical Imperial Order, under the leadership of the power-mad Emperor Jagang and his multitude of demonic underlings, unleashes a deadly plague. To find a cure Richard Cypher and his beloved Kahlan Amnell must seek out the legendary Temple of the Winds, a fortress of evil sealed away for three thousand years. But the path of the Seeker of Truth is never an easy one—even if he can reach the Temple at all, there is no guarantee he'll ever return.

About half way through, and it's so god damn painful with these god awful British accents. The monotone narrator in book 2 was 8000% more tolerable than this old weeb

The narrator did a fantastic job at giving different voices to different characters, but he mispronounced several characters' names.

Narrator is an over dramatic tool, he doesn't know the names. He makes Richard sound like some wanker private detective from a 50's movie that only speaks through gritted teeth, and all women in this mans mind speak like simpletons. If you like this series find this book somewhere else. Total disappointment.

Great book - keeps you engaged, but frustrating that the reader didn't listen to previous versions so the name pronunciation would be the same.

2 minutes in and im asking myself who tf is Collin? Only realizing it was Kahlan. . . This is the same audio group that recorded the last few. Why is there no consistency?

Terry Goodkind makes you believe and draws you in. Wonderful Series

Big Sword of Truth fan but am terribly disappointed in this audiobook. About halfway through now. The story is fine but the narrator is very poor. He has obviously not listened to previous recordings and mis-pronounces names of major characters. Kalen, KAY-len as fans know her, sounds like Colin and he even changes the stress at times throughout the book calling her CoLIN. He uses cheesy "Oliver-ish" old English stereotypes for certain characters while other characters retain an American accent. Sorry to rail-on about the narrator but It's really so bad that I'm considering just reading the synopsis and moving on to another book. Very, Very poor indeed. I gave the book a 2 only because the story is fine. I would give the narrator a zero if I could.

Loved it! The name thing does suck. But other than that, a great book.

Everyone has been correct in the narrator does not pronounce main characters names correctly. I really wish that they would redo this narration.

I agree wholeheartedly with the first reviewer. When you're a fan of a story having the characters names mispronounced is rather irritating. I am a regular audio book listener and poor narrating is a difficult thing to get past in a story you would otherwise love.

I dislike how this narrator pronounces the names. The book is great

Another good book in the series. There was a lot of negativity about the narrator in previous reviews, I didn't find him that bad once I got over his pronunciation of Kahlan.

love the story, but more importantly. the narrator...my god...his range of voices truly brought the story to life...even if he mispronounced Kahlan's name *wink*

So annoying that he didn’t listen to any previous books. He couldn’t have done worse with names of characters. Was super annoying but the book itself is great

I'll be honest. I refrained from purchasing this book based on the reviews. I had PTSD from the narrator from two books ago and I simply did not want to go through that again. However, this narrator is actually good. Yes, he does mispronounced a main characters name. beyond that I did enjoy the story and so glad I didn't let the negative reviews keep me away from this wonderful story.

worst narrator ever. how can you mispronounce one of the main characters name. just wasted my 1 a month on a good book but a crap narrator.

The narrator mispronounced some names, that's true, but he really sold the different characters voices and actually acted out a lot of the scenes which I thought was pretty great, it added a layer to what I was listening to. The book was of course great as usual, I think this may be my favorite of the series so far.

I am absolutely disappointed with this narrators inability to pronounce names in an established series. How difficult is it to research your job!? As well as the strange german accents that had no place in this midevil style world. Made Richard sound evil in many portions of the narrative. And Zed!.. don't get me started.

The adventure of the main characters is breathtaking and we stay on the edge almost all the time fearing the development of the facts. Very good, as always! But although the narrator was very intense in his interpretation, the voices are so different from the previous ones that it became difficult to follow the reading without the feeling of losing something.

This is the best narration so far in the series. The different voices and accents made it really entertaining.

As others have said, the narration, especially the pronunciation of Kahlen's name, was very off putting. On another note, I'm starting to dislike Richard overall. He's just rubbing me the wrong way now, ever since towards the ending of the last book.

Amazing book and great addition to the series. Like the others it starts out a bit slow but really picks up steam all the way until the end. The worst part about this is the narrator. He pronounces the names all wrong and his voice for Richard is just plain wrong. He has a great voice for emperor Jidang though, unfortunately he carries that same voice for Richard and I think it really detracts from the book. It also took me over half way to get used to his pronunciation of Khalen's name.

I have seen that the narrator was not favored. I don't think they could have done as well. I found this book very interesting and could not wait to hear more! I liked the different voices that the narrator incurred and it made it all the more fetching! Pronunciations are only half the battle of reading a book, the other half is keeping the interest of the reader. He kept my interest through the entire book! If you think you can do better have at it!