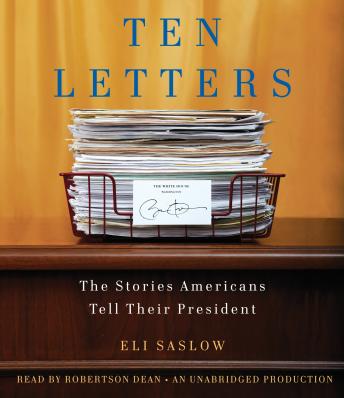 Every day, President Obama reads ten representative letters among the thousands he receives from citizens across the land. The letters come from people of all ages, walks of life, and political points of view. Some are heart­breaking, some angry, some hopeful. Indeed, Obama reads as many letters addressed “Dear Jackass” as “Dear Mr. President.” Eli Saslow, a young and rising star at the Washington Post, became fascinated by the power of these letters and set out to find the stories behind them.

Through the lens of ten letters to which Obama responded personally, this exceptionally relevant and poignant book explores those individual stories, taking an in-depth look at the misfortunes, needs, opinions, and, yes, anger over the current state of the country that inspired ten people to put pen to paper. Surprisingly, what also emerges from these affecting personal narratives is a story about the astounding endurance and optimism of the American people.

Ten Letters is an inspiring and important book about ordi­nary people and the issues they face every day—the very issues that are shaping America’s future. This is not an insider Washington book by any means, but a book for the times that tells the real American stories of today.