Tender with a Twist 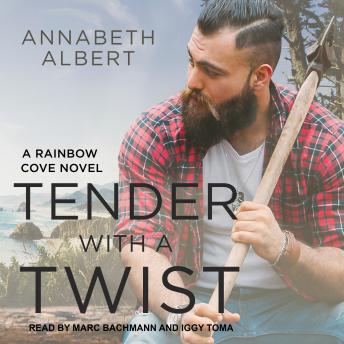 Curtis Hunt has made a name for himself as a chainsaw wood carver, winning national competitions and operating a small business in Rainbow Cove, Oregon. As winter whittles away his tourist traffic, his goal is just to survive the season and try to not get lost in grief for his dead lover. It's been two years, but he's sure he'll never be over the love of a lifetime. However, his body has a certain restlessness that he doesn't quite know how to calm.

Logan Rosner knows a thing or two about restlessness. It's what drove him to Rainbow Cove to be a chef at a bar and grill run by his friends. And it's what drives him to a single sizzling encounter with the local legendary lumberjack. Both men get far more than they expected and learn that first impressions aren't always accurate . . .

But when Logan proposes a series of sexy lessons, Curtis must decide how much he's willing to risk. He knows he can't afford to get attached to Logan's good cooking, his easy smiles, or his caretaking, but he keeps going back for more, even as deeper emotions become involved. Soon, Curtis must decide whether to risk his heart again or risk losing Logan for good.

Tender with a Twist