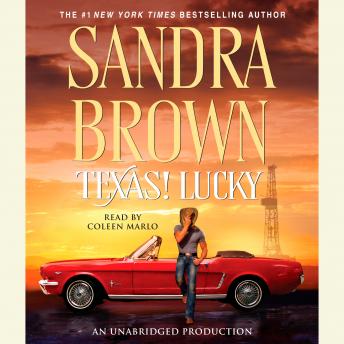 The first book in #1 New York Times bestselling author Sandra Brown’s beloved Texas! trilogy introduces readers to a close-knit family struggling to go on without its patriarch—and to a man in pursuit of an elusive woman who may hold his future in her hands.

Charismatic and easy on the eyes, Lucky Tyler is a born rebel. His romantic conquests have earned him his nickname, while his temper gives him his reputation as the family hothead. One night, he gets in a fight over a woman in distress, followed by a night of passion neither of them will soon forget. But the lady in question has a knack for disappearing. When news breaks of a suspicious fire at Tyler Drilling, Lucky is the prime suspect. Now the mystery woman is more than just the object of his obsession. She’s his alibi.

Devon Haines has tried her best to escape Lucky. Yet his bold pursuit and self-assurance are irresistible. In order to clear him of criminal charges, she must reveal her darkest secret; withholding her help could cost him everything he holds dear. Either way, she risks losing him forever.

Not much of a story. If you want a hot sex story go for it but not much else here.. not one of Sandra Brown's best.

This title is due for release on December 30, 2008
We'll send you an email as soon as it is available!