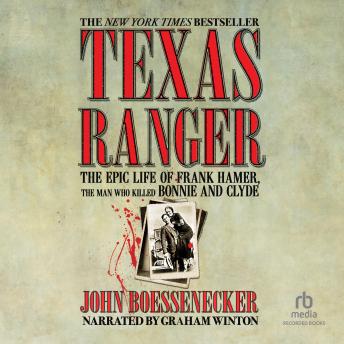 Texas Ranger: The Epic Life of Frank Hamer, the Man Who Killed Bonnie and Clyde

To most Americans, Frank Hamer is known only as the 'villain' of the 1967 film Bonnie and Clyde. Now, in Texas Ranger, historian John Boessenecker sets out to restore Hamer's good name and prove that he was, in fact, a classic American hero. From the horseback days of the Old West through the gangster days of the 1930s, Hamer stood on the frontlines of some of the most important and exciting periods in American history. He participated in the Bandit War of 1915, survived the climactic gunfight in the last blood feud of the Old West, battled the Mexican Revolution's spillover across the border, protected African Americans from lynch mobs and the Ku Klux Klan, and ran down gangsters, bootleggers, and Communists. When at last his career came to an end, it was only when he ran up against another legendary Texan: Lyndon B. Johnson. Written by one of the most acclaimed historians of the Old West, Texas Ranger is the first biography to tell the full story of this near-mythic lawman.

A good book on Frank.

I loved the book, as it appealed not only to the history buff in me, but to the desire for a story that was well written and interesting from cover to cover.

Amazing book! Everyone should know the story of Frank Hamer.