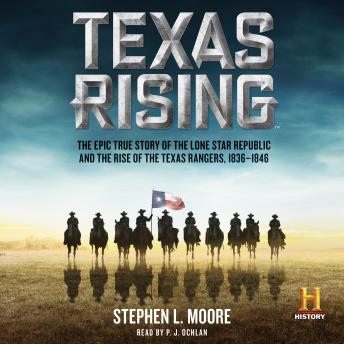 Texas Rising: The Epic True Story of the Lone Star Republic and the Rise of the Texas Rangers, 1836-1846

The official nonfiction companion to HISTORY’s dramatic series Texas Rising (created by the same team that made the ratings record-breaker Hatfields & McCoys): a thrilling new narrative history of the Texas Revolution and the rise of the legendary Texas Rangers who patrolled the violent western frontier

March 1836: The Republic of Texas, just weeks old, is already near collapse. William Barret Travis and his brave defenders of the Alamo in San Antonio have been slaughtered. Hundreds more Texan soldiers have surrendered at Goliad, only to be marched outside the fortress and executed by order of the ruthless Mexican general Santa Anna, a dictator denying Texans their freedom and liberty.

General Sam Houston—a hard-drinking, hot-tempered opportunist—remains in command of a small band of volunteer colonists, mercenaries, and the newly organized Texas Rangers. They are the last hope for Texas to challenge the relentless advance of Santa Anna’s much larger Mexican Army—yet many of them curse Houston, enraged by his decision to retreat across Texas before the advancing enemy.

The exhausted, outnumbered rebels will meet their destiny on an empty plain near the Gulf Coast next to the San Jacinto River—and make a stand that determines the fate of the young nation. “Remember the Alamo!” and “Remember Goliad!” will be the battle cries, and the order of the day will echo Travis’s at the Alamo: Victory or death.

Acclaimed Texas historian Stephen L. Moore’s new narrative history tells the full, thrilling story of the Texas Revolution from its humble beginnings to its dramatic conclusion, and reveals the contributions of the fabled Texas Rangers—both during the revolution and in the frontier Indian wars that followed.

If you love learning about Texas History this is a book for you. Very informative and easy to stop and pick up later like you never left. Narrative was ok but someone should have told him how to pronounce many of the location names in “Texican” because he murdered a lot of the names so badly I didn’t know where he was talking about and I’ve lived in Texas my hole life. Still a really good listen though and that even became kind of funny after awhile.