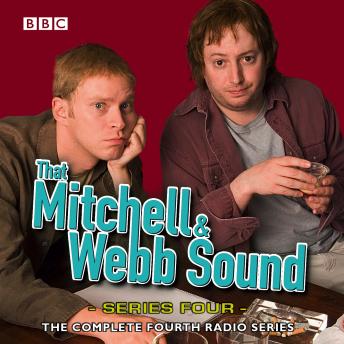 The first three series of That Mitchell and Webb Sound gained an army of fans, huge critical acclaim (Series Two won a Sony Silver Award) and led to a massively successful television series, ‘That Mitchell and Webb Look’. In this fourth fantastic series, the duo once again return to their radio roots. Meet an orthopedic company with its very own trans-galactic portal (‘the stargate is not a bin’), discover how Saturday night TV shows are invented (such as My Big Fat Greek Big Breakfast) and marvel at a mysterious new arrival at the Institute of Extraordinary Creatures. Plus the last of the Easter Islanders have a lovely surprise for their god. There’s also a police officer determined to catch a real menace to society (i.e. Top Cat), and an exciting new reality show uses soap stars, cutting-edge surgery and some horses in Make Me a Celebrity Centaur. Plus we take a look at the new twelve blade razor, Doctor Doolittle regrets striking up a conversation with a goldfish, Superman outstays his welcome in the office and two comedians face the old lady job justification hearings... As heard on BBC Radio 4, this complete fourth radio series also features Olivia Colman, James Bachman and Sarah Hadland. ‘What a delight, having That Mitchell and Webb Sound back on the radio’ - Guardian.