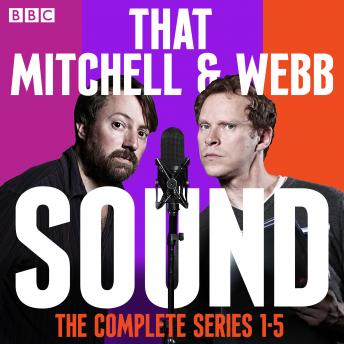 That Mitchell and Webb Sound: The Complete Series 1-5: The BBC Radio 4 comedy show

'Fresh and full of invention' The Telegraph

Welcome to the inside-out world of Mitchell and Webb, a strange and surreal place populated by misfits, eccentrics, talking animals and a few stray Radio 4 arts programme presenters.

Included here are all five series of their fantastically skewed comedy show, packed with offbeat sketches and peculiar characters. Meet seedy snooker commentators Ted and Peter; poorly matched crime-fighting duo Angel Summoner and BMX Bandit; a cop who doesn't get results but, by God, he does things by the book; and some nervous Nazis who've just noticed their caps have skulls on them...

Find out what James Bond is really like as a party guest; thrill to The Surprising Adventures of Sir Digby Chicken-Caesar; and play the maths quiz that everyone is talking about, but no one understands - Numberwang! In addition, you can listen to the Alpine Archers on Radio Switzerland; join Raymond Terrific and his panel of boffins on Big Talk; and tune in to the exciting new reality show Make Me a Celebrity Centaur, featuring soap stars, cutting-edge surgery and some horses.

Also included is the half-hour sci-fi comedy Daydream Believers, in which David Mitchell and Robert Webb star as tetchy novelist Ray and his gormless flatmate Colin and, in a parallel space adventure concocted by Ray, as Baron Amstrad and his retro-looking android Info. The supporting cast incudes Olivia Colman, Mark Benton, Simon Greenall and Mark Evans.

NB: Contains humour that some listeners may find offensive

This title is due for release on January 12, 2023
We'll send you an email as soon as it is available!