The Gazette BOX SET: A portrait of British life through the centuries in six volumes. A full-cast Audio. 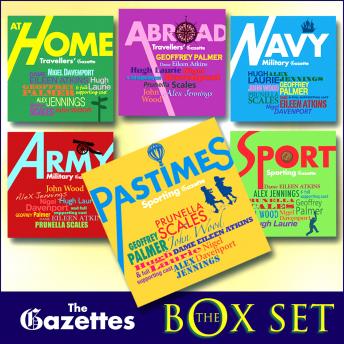 The Gazette Box Set is a vivid portrait of British life through the centuries, told entirely in the words of those who were there.
Performed by an outstanding company of award-winning actors including Dame Eileen Atkins, Cheryl Campbell, Nigel Davenport, Alex Jennings, Richard Johnson OBE, Hugh Laurie CBE, Michael Maloney, Geoffrey Palmer OBE, Michael Pennington, Prunella Scales CBE, Samuel West & John Wood CBE & full supporting cast.
Presented in SIX volumes:
NAVY Gazette: A voyage into the colourful events of the British Navy at Sea.
ARMY Gazette: A captivating foray into the turbulent events of the British Army at war.
SPORTS Gazette: A rousing gallop through the British sporting calendar.
SPORTING PASTIMES Gazette: A hop, skip and a jump alongside the British at play.
TRAVEL AT HOME Gazette: A 400 year ramble through the towns and villages of the British Isles.
TRAVEL ABROAD Gazette: We follow in the footsteps of the intrepid British Traveller as they explore abroad.
“It is a highly enjoyable collection. Some pieces are just dazzling.” Independent on Sunday
“An extraordinary series... deserves a medal. The readers are all excellent and many of them distinguished.” The Spectator
“From the same stable that produced The Chronicle, my favourite audio this year, I've just listened equally spellbound to a compilation of travellers' tales at home.” The Guardian
© & ℗ 2022 Mr Punch Audiobooks Ltd

The Gazette BOX SET: A portrait of British life through the centuries in six volumes. A full-cast Audio.