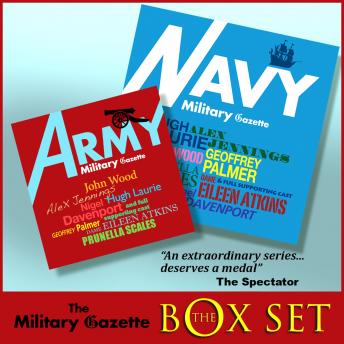 A fascinating foray into British military history in TWO volumes, told entirely in the words of those who were there.
NAVY Gazette: Experience the reality of life in the British Navy as we sail from the Viking invasion of Anglo Saxon England to a young sailor’s grief at the death of Lord Nelson, from the Spanish Armada to the Battle of Jutland and from organised press gangs to murderous mutinies.
ARMY Gazette: From the Roman invasion of Britain to the retreat from Dunkirk, from the horrors of Culloden to the courage of Rourke’s Drift, we hear first-hand the stories behind the triumphs and tragedies that make up the history of the British Army.
Performed by an outstanding company of award-winning actors including Dame Eileen Atkins, Cheryl Campbell, Nigel Davenport, Alex Jennings, Richard Johnson OBE, Hugh Laurie CBE, Michael Maloney, Geoffrey Palmer OBE, Michael Pennington, Prunella Scales CBE, Samuel West, John Wood CBE & full supporting cast.
Also available as part of The Gazettes Box Set, a six-volume edition (Military, Sport & Travel) creating a vivid portrait of British life through the centuries.
“It is a highly enjoyable collection. Some pieces are just dazzling.” Independent on Sunday
“An extraordinary series... deserves a medal. The readers are all excellent and many of them distinguished.” The Spectator
“From the same stable that produced The Chronicle, my favourite audio this year, I've just listened equally spellbound to a compilation of travellers' tales at home.” The Guardian
© & ℗ 2022 Mr Punch Audiobooks Ltd