The Remains of Company D: A Story of the Great War 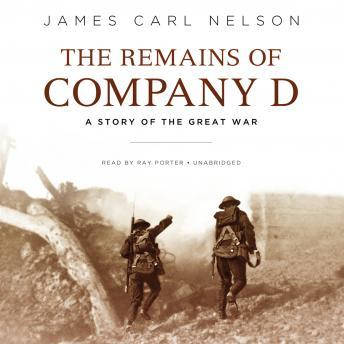 Haunted by an ancestor’s tale of near death on a distant battlefield, James Carl Nelson set out in pursuit of the scraps of memory of his grandfather’s small infantry unit. Years of travel across the world led to the retrieval of unpublished personal papers, obscure memoirs, and communications from numerous doughboys, as well as original interviews with the descendents of his grandfather’s comrades in arms. The result is a compelling tale of battle rooted in new primary sources, and one man’s search for his grandfather’s legacy in a horrifying maelstrom that is poorly understood and nearly forgotten in the world today. Nelson’s account follows the members of Company D, 28th Infantry Regiment, United States First Division, from enlistment to combat to the effort to recover their remains, focusing on three major battles at Cantigny, Soissons, and Meuse-Argonne.

The Remains of Company D: A Story of the Great War

This title is due for release on March 1, 2010
We'll send you an email as soon as it is available!