The Sporting Gazette BOX SET: A rousing gallop through the British sporting calendar of the last nine hundred years in two volumes. A full-cast audio. 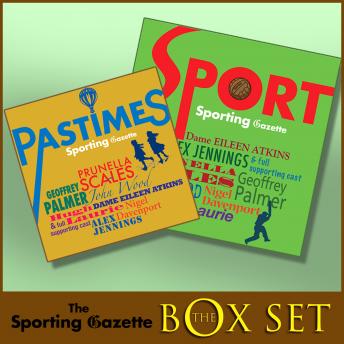 A rousing gallop through the British sporting calendar of the last nine hundred years, as we eavesdrop on some of the most memorable events in the history of British sport, told entirely in the words of those who were there, in TWO volumes.
Performed by an outstanding company of award-winning actors including Dame Eileen Atkins, Cheryl Campbell, Nigel Davenport, Alex Jennings, Richard Johnson OBE, Hugh Laurie CBE, Michael Maloney, Geoffrey Palmer OBE, Michael Pennington, Prunella Scales CBE, Samuel West & John Wood CBE & full supporting cast.
SPORTS Gazette: From sword fights to boxing, jousting to motor racing, football to cricket, we journey in the company of such diverse characters as A.A. Milne, Dick Francis, Queen Victoria, Kenneth Wolstenholme, Tony Jacklin, Sir Arthur Conan Doyle and many more.
Sporting PASTIMES Gazette: Discover the colourful story of the British at play, eavesdrop on Pitt the younger playing a game of marbles, join Lord Mountbatten at a cock fight in India, take a dip in the channel with Captain Webb, or simply enjoy the very British sport of… hopping.
Also available as part of The Gazettes Box Set, a six-volume edition (Military, Sport & Travel) creating a vivid portrait of British life through the centuries.
“It is a highly enjoyable collection. Some pieces are just dazzling.” Independent on Sunday
“An extraordinary series... deserves a medal. The readers are all excellent and many of them distinguished.” The Spectator
“From the same stable that produced The Chronicle, my favourite audio this year, I've just listened equally spellbound to a compilation of travellers' tales at home.” The Guardian
© & ℗ 2022 Mr Punch Audiobooks Ltd

The Sporting Gazette BOX SET: A rousing gallop through the British sporting calendar of the last nine hundred years in two volumes. A full-cast audio.