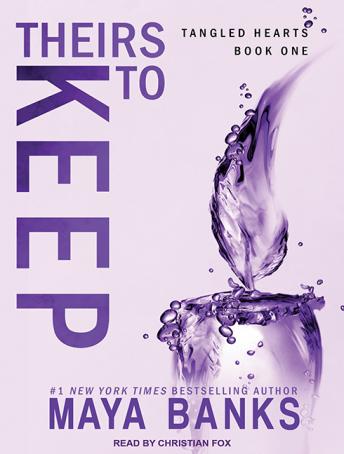 When Cade Walker and Merrick Sullivan find Elle hiding in the cabinet of a gun store, they know they can't just walk away from the fragile woman with no memory of who she is or who tried to kill her. Merrick is training for the title shot in the heavyweight division as a mixed martial artist and can't afford distractions, but neither can he turn his back on the woman who tugs at his heartstrings.

Elle feels safe with her two protectors, and the longer she spends with them, the more she realizes that she has no desire to remember her past-not when it could compromise her future with Cade and Merrick.

Cade has his own set of issues when it comes to Elle, and it quickly becomes clear to the two men that for the first time in their friendship, a woman is coming between them. But what if they just kept her there? Between them. Where she belongs.

HOLY CLIFFHANGER BATMAN!!! WTF am I supposed to do with that???? You can't just leave us hanging without the follow up book ready to go.. OMG.. I can't even. This book was so intriguing and mysterious. Trying to figure out what happened to Elle in her previous life and if someone is in fact looking for her. There there is the romance between her, Cade and Merrick and I mean what can I say... two alpha males in a sandwich of love... I'LL TAKE IT.. These men are ready to kill for her and I love it! But seriously.. I go to Maya Banks' website and this book was published in 2013.... 2013... it's 2021 and there's STILL not book 2 or 3... I cant' work like this... now I'm gonna be stuck in cliffhanger hell... I gave 3 stars just for not having the rest of the series done... BOO! :P

Absolutely amazballs! But my one complaint is this has been out since 2013 it is now 2021 and still the other 2 books aren't out.

Great love story. Not very steamy. Ending doesn’t answer all of the questions as to situation resolution

This narrator’s voice is so freakin’ sexy and the sex scenes in this title are smokin’ hot! This author sure knows how to write sexy stories

This title is due for release on November 11, 2013
We'll send you an email as soon as it is available!