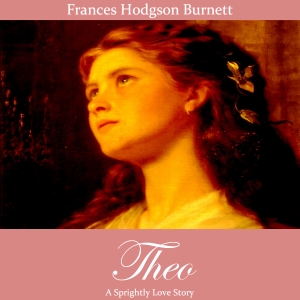 It's described as "A SPRIGHTLY LOVE STORY" and it is written by F. H. Burnett, "one of the most charming among American writers!" (Summary by Project Gutenberg and Elli)

I am not sure what ‘a sprightly love story ‘ is meant to be, but instead I might say it is a somewhat melodramatic love story. Theodora has a chance to leave her home that is full of children and full of the labours that go with a reduced income. She would not have been able to go to Mrs Throckmorton, her aunt if her older sister had not loaned her dresses from her own time at the aunt when she had lost her love, her husband to be who died one week before her wedding. So with the borrowed clothing, she goes to London. Her aunt sees she is special and soon is giving her even more than dresses, taking her to the theatre and lending her jewels. Theo makes the acquaintance of Mrs Throckmorton’s friend Denis Ogilby. Because he visits often, she gets to know him. Her aunt tells her that Mr Ogliby has been engaged for five years to Pricilla Gower. And so, as the friendship deepens, Denis realises he has a dilemma and runs away to the continent, admitting he is being cowardly. As Theo realises she will no longer have his company, she also realises the deep feeling she also has. But she does not want to hurt Priscilla or to be the cause of Mr Ogilby doing something dishonourable. She begins visiting Priscilla, becoming quite friendly with Elizabeth Gower, the maiden aunt. Mrs Throckmorton decides to take Theodora to Paris. There Theo’s beauty catches the eye of the fashionable people. As Theo compares the new friends and the attentions of the gentlemen, she realises that more than missing her dear friend, she truly loves him. Yet even more she does not want him to do the dishonourable thing, but instead to go through the marriage. And so fate steps in. Each of the three going through many trials before the end.