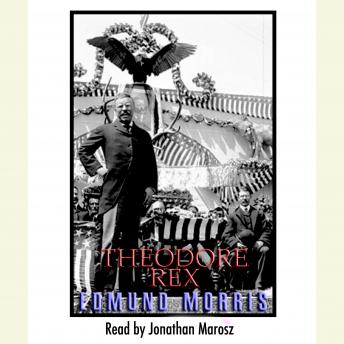 WINNER OF THE LOS ANGELES TIMES BOOK PRIZE FOR BIOGRAPHY • “[Theodore Rex] is one of the great histories of the American presidency, worthy of being on a shelf alongside Henry Adams’s volumes on Jefferson and Madison.”—Times Literary Supplement

Theodore Rex is the story—never fully told before—of Theodore Roosevelt’s two world-changing terms as President of the United States. A hundred years before the catastrophe of September 11, 2001, “TR” succeeded to power in the aftermath of an act of terrorism. Youngest of all our chief executives, he rallied a stricken nation with his superhuman energy, charm, and political skills. He proceeded to combat the problems of race and labor relations and trust control while making the Panama Canal possible and winning the Nobel Peace Prize. But his most historic achievement remains his creation of a national conservation policy, and his monument millions of acres of protected parks and forest.

Theodore Rex ends with TR leaving office, still only fifty years old, his future reputation secure as one of our greatest presidents.

Great book. Unfortunately felt like this audio version has some issues. It sounds poorly recorded at times, almost like a cheap copy of a nicely done audio book. It also is the abridged version and I get left with the feeling I missed out on good things from the book.

Spellbinding book about Teddy Roosevelt's presidential years and the middle installment of Morris's acclaimed trilogy. It's a literary approach to the genre with a great hook -- the scene of McKinley's assassination and Roosevelt's swearing in.

The book, Theodore Rex, is a fantastic second installment in the Theodore Roosevelt trilogy by Edmund Morris. My only complaint is that the audio recording quality is not very good and sounds scratchy and took away from the experience a small amount. Besides that, it was a fantastic book.

This title is due for release on December 26, 2001
We'll send you an email as soon as it is available!