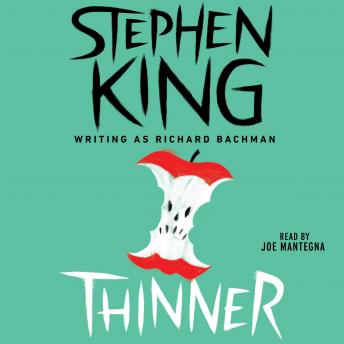 The “extraordinary” (Booklist) novel of a cursed man’s quest to find the source of his nightmare and to reverse it before he becomes…nothing at all. This #1 New York Times bestseller from Stephen King, writing as Richard Bachman, “pulsates with evil…[and] will have you on the edge of your seat” (Publishers Weekly).

“You can’t do anything… It’s gone too far. You understand, Halleck? Too…far.

Attorney Billy Halleck seriously enjoys living his life of upper-class excess. He’s got it all­—an expensive home in Connecticut, a loving family…and fifty extra pounds that his doctor repeatedly warns will be the death of him. Then, in a moment of carelessness, Halleck commits vehicular manslaughter when he strikes a jaywalking old woman crossing the street. But Halleck has some powerful local connections, and gets off with a slap on the wrist…much to the fury of the woman’s mysterious and ancient father, who exacts revenge with a single word: “Thinner.” Now a terrified Halleck finds the weight once so difficult to shed dropping effortlessly—and rapidly—by the week. Soon there will be nothing left of Billy Halleck…unless he can somehow locate the source of his living nightmare and reverse what’s happened to him before he utterly wastes away…

Very good book. Interesting to have it read by Joe Mantegna because he was in the film version. I thought he did an excellent job reading. The story is great and keeps you engaged.

I love this book and Joe Mantegna is a great narrator. He was also awesome in the movie.

This was another really good book by Stephen King. The narrator was also really good. The only thing that I didn't like was the music they played occasionally. For some reason, it just really annoyed me. Other than that, it is recommended.

I love Stephen King, but this was not my favorite. It was just a little too long and drawn out and many times boring. I did enjoy Joe Mantegna as the reader!

Joe Mantegna was the PERFECT voice to read this book! Someone cast this spot on!!! It's a good story, held my interested but at the very end was predictable, that was the only disappointing thing about the book. You knew who was going to eat that pie!