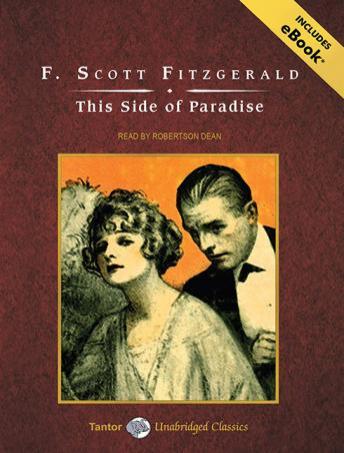 This Side of Paradise

If the Roaring Twenties are remembered as the era of 'flaming youth,' it was F. Scott Fitzgerald who lit the fire. His semiautobiographical first novel, This Side of Paradise, became an instant bestseller and established an image of seemingly carefree, party-mad young men and women out to create a new morality for a new, post-war America. It traces the early life of Amory Blaine from the end of prep school through Princeton to the start of an uncertain career in New York City.

Alternately self-confident and self-effacing, torn between ambition and idleness, the self-absorbed, immature Amory yearns to run with Princeton's rich, fast crowd and become one of the 'gods' of the campus. Hopelessly romantic, he learns about love and sex from a series of beautiful young 'flappers,' women who leave him both exhilarated and devastated. Fitzgerald describes it all in intensely lyrical prose that fills the novel with a heartbreaking sense of longing, as Amory comes to understand that the sweet-scented springtime of his life is fragile and fleeting, disappearing into memory even as he reaches for it.

This title is due for release on August 3, 2010
We'll send you an email as soon as it is available!