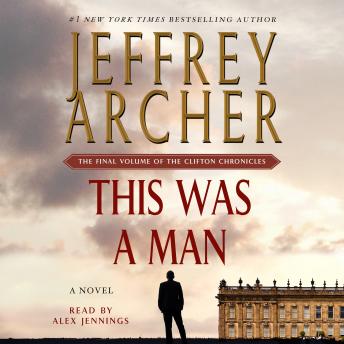 This Was a Man: The Final Volume of The Clifton Chronicles

#7 of The Clifton Chronicles

The seventh and final volume in Jeffrey Archer’s New York Times bestselling Clifton Chronicles series, This Was a Man, brings the epic saga of the Clifton family’s love, loss, and ambition to a dazzling conclusion.

Harry Clifton’s story began in 1920, as a dock worker in England, and now he is set to write his magnum opus. As he reflects on his days, the lives of his family continue to unfold, unravel, and intertwine in ways no one could have imagined . . .

Harry’s wife Emma, who just completed her time at the Bristol Royal Infirmary, receives a surprise call from Margaret Thatcher. Meanwhile, Giles Barrington discovers a shocking truth about his wife, Karin. Sebastian Clifton becomes chairman of Farthings Kaufman bank, but only after Hakim Bishara’s abrupt resignation. Sebastian’s daughter Jessica is expelled from school, but her aunt Grace comes to the rescue. And Lady Virginia, who is set to flee the country to avoid her creditors, finds an opportunity to clear her debts after the Duchess of Hertford dies—and a way to finally trump the Cliftons and Barringtons.

A fabulous series that could not put down from book 1 to 7. I hope I can find another complication that is so well written and orated.

I have recommended Audio Books to many, because of this series, and this narrator. Loved all six books, and very sorry to have them end.

Loved the book, so sad to see the series come to an end. I love Jeffrey Archer's book, but the books of The Clifton Family Chronicles are some of my favourite books ever!