Thoth The Author of Ancient Egyptian Wisdom: Exploring The Life and Teachings of Thoth The Atlantean 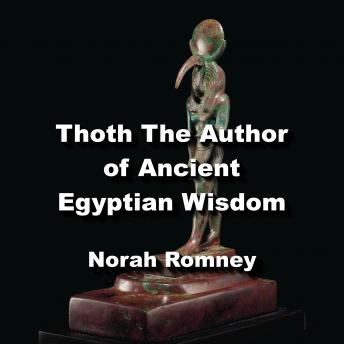 Thoth's roles in Egyptian mythology were many. He served as scribe of the gods, credited with the invention of writing and Egyptian hieroglyphs. In the underworld, Duat, he appeared as an ape, Aani, the god of equilibrium, who reported when the scales weighing the deceased's heart against the feather, representing the principle of Maat, was exactly even.

The ancient Egyptians regarded Thoth as One, self-begotten, and self-produced. He was the master of both physical and moral (i.e. divine) law, making proper use of Ma'at. He is credited with making the calculations for the establishment of the heavens, stars, Earth, and everything in them.

The Egyptians credited him as the author of all works of science, religion, philosophy, and magic. The Greeks further declared him the inventor of astronomy, astrology, the science of numbers, mathematics, geometry, surveying, medicine, botany, theology, civilized government, the alphabet, reading, writing, and oratory. They further claimed he was the true author of every work of every branch of knowledge, human and divine.

Thoth The Author of Ancient Egyptian Wisdom: Exploring The Life and Teachings of Thoth The Atlantean

This title is due for release on June 7, 2021
We'll send you an email as soon as it is available!