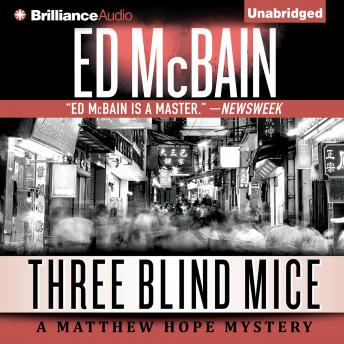 #9 of A Matthew Hope Mystery

When three Vietnamese immigrants are found murdered and savagely mutilated in Calusa, Florida, police finger wealthy landowner Stephen Leeds as the prime suspect. The now-deceased trio had recently been acquitted of raping Leeds’s wife, Jessie. From his jail cell, Leeds insists that, while they may have gotten what they deserved, he didn’t dispense the vigilante justice. That’s enough for attorney Matthew Hope to take on the case. But every piece of evidence ties his client to the grisly killings, from Leeds publicly vowing to avenge his wife’s assault to the discovery of his wallet at the scene. And it doesn’t help matters that Hope is going up against Assistant State Attorney Patricia Demming, who is dead-set on seeing Leeds fry for the crime. Acclaimed author and fan favorite Ed McBain blends powerful suspense with master storytelling for a thrilling and charged tale of two men—one whose life hangs in the balance and one who must follow a convoluted trail of secrets, seduction, and sabotage to get to the truth.

This title is due for release on January 22, 2013
We'll send you an email as soon as it is available!