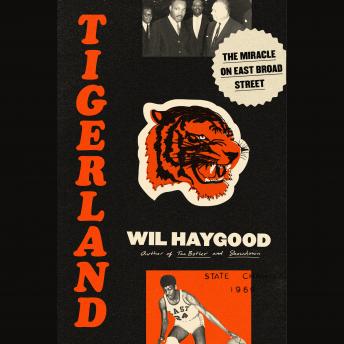 Tigerland: 1968-1969: A City Divided, a Nation Torn Apart, and a Magical Season of Healing

Against the backdrop of one of the most tumultuous periods in recent American history, as riots and demonstrations spread across the nation, the Tigers of poor, segregated East High School in Columbus, Ohio did something no team from one school had ever done before: they won the state basketball and baseball championships in the same year. They defeated bigger, richer, whiter teams across the state and along the way brought blacks and whites together, eased a painful racial divide throughout the state, and overcame extraordinary obstacles on their road to success. In Tigerland, Wil Haygood gives us a spirited and stirring account of this improbable triumph and takes us deep into the personal lives of these local heroes. At the same time, he places the Tigers’ story in the context of the racially charged sixties, bringing in such national figures as Jackie Robinson, Martin Luther King Jr., and Richard Nixon, all of whom had a connection to the teams and a direct effect on their mythical season.

Tigerland: 1968-1969: A City Divided, a Nation Torn Apart, and a Magical Season of Healing