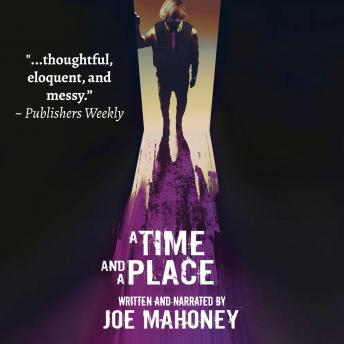 A Time and a Place

Mahoney’s work is great for those who like their speculative fiction thoughtful, eloquent, and messy.”

Barnabus J. Wildebear's comfortable life of sipping Lagavulin and teaching Junior High School English comes to an abrupt halt when his fifteen year old nephew Ridley is recruited by an alien to help fight a war half-way across the galaxy. After having promised his sister on her deathbed that he would take care of her son, nothing means more to Wildebear than keeping Ridley safe.

Unfortunately, rescuing Ridley will mean travelling through a dangerous portal capable of transporting Wildebear to other worlds and times. Just about anywhere, it seems, except where he actually wants to go. Accompanied by an obnoxious talking wristwatch, Wildebear will find himself forced to evade armies, survive telepathic assaults, and inhabit the minds of alien beings. He will come to question the nature of free will and his own sanity. All this before being forced to pick sides in an ancient conflict. Is all this trouble worth it for an ungrateful teenager who doesn't even want to be saved?

Of course it is. Wildebear cannot fail: to do so would mean failing not only his sister, her son, and humanity, but Wildebear himself.

Time and a Place