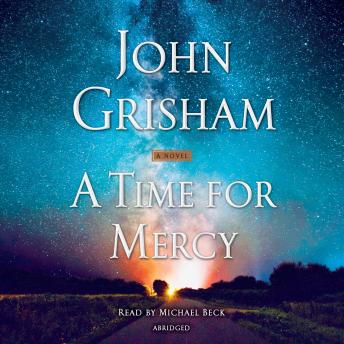 A Time for Mercy

#1 NEW YORK TIMES BESTSELLER • Jake Brigance is back! The hero of A Time to Kill, one of the most popular novels of our time, returns in a courtroom drama that The New York Times says is 'riveting' and 'suspenseful.'

Clanton, Mississippi. 1990. Jake Brigance finds himself embroiled in a deeply divisive trial when the court appoints him attorney for Drew Gamble, a timid sixteen-year-old boy accused of murdering a local deputy. Many in Clanton want a swift trial and the death penalty, but Brigance digs in and discovers that there is more to the story than meets the eye. Jake’s fierce commitment to saving Drew from the gas chamber puts his career, his financial security, and the safety of his family on the line.

In what may be the most personal and accomplished legal thriller of John Grisham’s storied career, we deepen our acquaintance with the iconic Southern town of Clanton and the vivid cast of characters that so many readers know and cherish. The result is a richly rewarding novel that is both timely and timeless, full of wit, drama, and—most of all—heart.

Bursting with all the courthouse scheming, small-town intrigue, and stunning plot twists that have become the hallmarks of the master of the legal thriller, A Time for Mercy is John Grisham’s most powerful courtroom drama yet.

There is a time to kill and a time for justice. Now comes A Time for Mercy.

A great read during a travel. Good narration with different voices in character made it more interesting to follow along

I can’t wait for it to be a movie! I hope Matthew McConaughhey reprises his role as Jake. It was a great follow up to “A Time To Kill” (which was more gripping). However, this book brought the main character back to life in a way we could relate to much more. Jake was upfront and personal. Grisham may have taken a few liberties with court procedures for the flow of the story. Loved it and recommended it to friends and family.

Time For Mercy was an awful book. Not only was it full of fillers to get to the main issue - trial of the kid for murder it was legally inaccurate. The fact the sister was raped and pregnant would have been excluded by pretrial motion as irrelevant and inflammatory have a no basis of the state of mind of the kid. The killers reputation only comes in to play if it has some affect on the kid. No judge in his right mind would ever speak to a foreman of a jury ex parte nor declare a mistrial in less than 24 hours. Some judges will the jury still liberate for a week!

good narrator made it good listening.

Superb! Cant stop! The Best Yet~