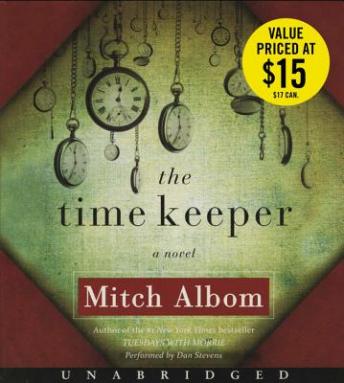 From the author who's inspired millions worldwide with books like Tuesdays with Morrie and The Five People You Meet in Heaven comes his most imaginative novel yet, The Time Keeper--a compelling fable about the first man on Earth to count the hours.

The man who became Father Time.

In Mitch Albom's exceptional work of fiction, the inventor of the world's first clock is punished for trying to measure God's greatest gift. He is banished to a cave for centuries and forced to listen to the voices of all who come after him seeking more days, more years.

Eventually, with his soul nearly broken, Father Time is granted his freedom, along with a magical hourglass and a mission: a chance to redeem himself by teaching two earthly people the true meaning of time.

He returns to our world--now dominated by the hour-counting he so innocently began--and commences a journey with two unlikely partners: one a teenage girl who is about to give up on life, the other a wealthy old businessman who wants to live forever. To save himself, he must save them both. And stop the world to do so.

Told in Albom's signature spare, evocative prose, this remarkably original tale will inspire readers everywhere to reconsider their own notions of time, how they spend it, and how precious it truly is.

I really liked this novel, beginning with one mans curiosity to find out if each day has a commonality in space he invents the first clock thus creating time. As punishment for creating time which people will now use to be valued and measured he must atone by becoming the time keeper. Not only a great read but also a great reminder that time is not only precious but also fleeting!

Good storyline and another good book from Mitch Albom. It made me want to live my life the way that I want to and not for the approval of others. It also made me want to better understand and be interested in others and their stories

Good book but wanted something better than a ghosts-of-future type ending.