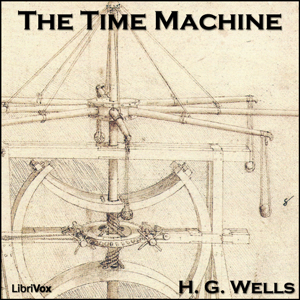 Surely the Time Traveler threw great dinner parties! His guests were treated to a once-in-forever trial of a miniature time machine - an exquisite miniature that acted so flawlessly as to appear to be stage magic. That his guests did not believe the explanation - the machine vanished into the mists of the future - was patent. Still, a couple of the more thoughtful had reservations about branding the demonstration an outright trickery. And what about the nearly-complete full-size Machine in the Traveler's laboratory?

Confronted at the next party by the disheveled Traveler, who had apparently suffered privations and who displayed two curious flowers of no known type, the Narrator's wonderment increased. For the Traveler provided a perfectly arresting story to explain his condition - a surprising tale of a far future where humankind divides into a carefree above-ground race, the Eloi, and a mechanical subterranean race, the Morlocks. A tale in which it appears that the inheritors of the Earth inhabit it as cattle for the feeding of their underground cousins!

Believe, or disbelieve? But perhaps the inventive genius of a man who can translate "thousands of millions of days" of time travel into an exact date should not be doubted! (Intro by Mark F. Smith)

It was as excellent as I remembered it. The premise is very engaging, and the tale well told. The narration was very well done, to the point that your visualisation of the scenes was as though you were reading it yourself. All in all, this book, as read by Mark F. Smith is an excellent way to cross this classic early sci-fi title off your list.

Enjoyed this very much

always a favourite story of mine. The reading is so well spoken,I was drawn into the places and adventures.Each chapter wanted you to hear more.. excellent . thank you

I absolutely love this book and the narrator does a great job, this is the perfect book for long nights driving or working in the shop or something like that!

I recall seeing the 1960 film starring Rod Taylor and being fascinated by the concept of time travel. Now, after reading the book for the first time, I am just as interested. A thought provoking and entertaining read, which has not lost its power to engender thoughts of the ultimate fate of mankind or, indeed, the world.

Great narrative! I’ve never read the book - and I cannot shake the ending from my mind!

not a bad book, but it was a wee bit long winded weird and fell a little bit flat. having said that I'm keen to read more by the same author. I enjoyed the way he set up the science and made everything seem justifiably believable. Narration was great.

This title is due for release on January 25, 2015
We'll send you an email as soon as it is available!