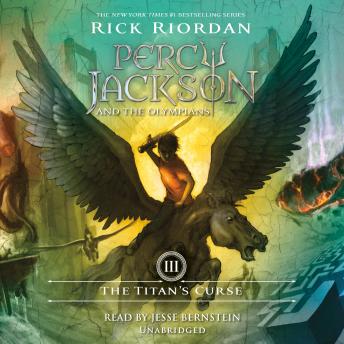 The Titan's Curse: Percy Jackson and the Olympians: Book 3

#3 of Percy Jackson and the Olympians

When Percy Jackson receives an urgent distress call from his friend Grover, he immediately prepares for battle. He knows he’ll need his powerful demigod allies, Annabeth and Thalia, at his side; his trusty bronze sword, Riptide; and . . . a ride from his mom.
The demigods race to the rescue, to find that Grover has made an important
discovery: two new powerful half-bloods whose parentage is unknown. But that’s not all that awaits them. The Titan lord, Kronos, has set up his most devious trap yet, and the young heroes have just fallen prey. Hilarious and action-packed, this third adventure in the series finds Percy faced with his most dangerous challenge so far: the chilling prophecy of the Titan’s curse.

This book was so good I had to get some sleep after I read it the whole series in 2 days.

This book is amazing! I love it so much. I can't wait to read the next book!The narrators voice of this story is very good! 1,000 stars out of 10 !

I am such a huge fan of the first two books in this series that I thought to myself "I couldn't possibly love this one as much". I was so wrong. This one was by far my favorite.

The book was really interesting and entertaining. The narrator made it pretty engaging with all the voice changes for characters but can still be improved.

Great read for all ages the narration and detail of the book as me captive in the world of demigods and gods.

Percy Jackson is a amazing story Filled with adventure

Perfect narrator, gets better each book. I will never forget “metal angels from mars”

The narrator’s “accents” are at times offensive and embody racial stereotypes (eg Annabeth’s stepmother, who is described as an “Asian” woman- the narrator should not take it upon themself to give her a stereotypical accent, particularly when the text does not say she has any kind of accent at all).

Love this series. the narrator is not my favorite. he gets better with each book but in the beginning he didn't have any atitude or variations of voices also he's not consistent with some caracter voices they change each book Grover and clarice.

Great book to listen to at night....our family has listened to it many times at bed time.

HAHAHAHA is the best book ever

Love it the narrator, keeps you interested, love the voice changes. Can't wait for the next one

This title is due for release on April 24, 2007
We'll send you an email as soon as it is available!