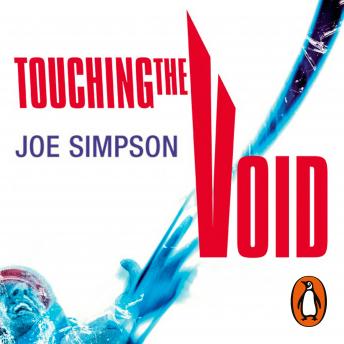 Joe Simpson, with just his partner Simon Yates, tackled the unclimbed West Face of the remote 21,000 foot Siula Grande in the Peruvian Andes in June 1995. But before they reached the summit, disaster struck. A few days later, Simon staggered into Base Camp, exhausted and frostbitten, to tell their non-climbing companion that Joe was dead. For three days he wrestled with guilt as they prepared to return home. Then a cry in the night took them out with torches, where they found Joe, badly injured, crawling through the snowstorm in a delirium. Far from causing Joe's death, Simon had paradoxically saved his friend's life. What happened, and how they dealt with the psychological traumas that resulted when Simon was forced into the appalling decision to cut the rope, makes not only an epic of survival but a compelling testament of friendship.

love the movie loved the book

This book was incredible. I have seen the movie and wanted to see how it correlated to the book and I was not disappointed by either. I love this story about will power, survival and what it takes to beat the odds. This guy was incredible and he lived to tell the story of how he broke his leg, had his friend cut the rope, and crawl 6 miles back to camp in 3 days before his friends left thinking he was dead. I love the way it was written and narrated. This is one of my top 5 favorite books to listen to now. Amazing story.

This title is due for release on March 1, 2012
We'll send you an email as soon as it is available!