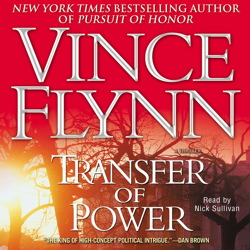 This “roller-coaster, edge-of-your-seat thriller” (Star-Tribune, Minneapolis) in the #1 New York Times bestselling Mitch Rapp series follows the CIA’s top operative as he must stop a massacre in Washington, DC, and save the president before terrorists reach the White House.

The stately calm of a Washington morning is shattered when a group of terrorists descends, killing dozens and taking nearly one hundred hostages as they try to infiltrate the White House. The Secret Service immediately evacuates the president to an underground bunker—and while officials argue over how best to negotiate with the enemy, Mitch Rapp, the CIA’s top counterterrorism operative, moves stealthily among the hidden corridors and secret passageways of the nation’s capital to save the hostages before the terrorists reach the president. But there’s someone waiting in the wings, someone within the Washington elite, who is determined to see Rapp’s rescue mission fail.

With heart-pounding thrills and feverish pacing, Transfer of Power “mixes in a spicy broth of brutal terrorists, heroic commandos, and enough secret-agent hijinks to keep the confrontation bubbling until its flag-raising end” (Publishers Weekly).

What is there to say? If you like bad ass characters, they dont get any better than Mitch Rapp. He is probably my favorite character. This is a great book.

I couldn’t put it down it was brilliant

This is another great listen! Vince Flynn brings Mitch Rapp on another suspenseful journey rescuing another President from the Liberal Democrats neglect of common sense! And the narration is outstanding!

Great plot and story. Not a fan of the narrator.

Huge fan, couldn't wait to get in the car for the next part...

A fantastic book! Fast paced action from the beginning till the end! Story superbly told by the narrator! Will most definitely be ordering next book in this series.

love these stories. Good guys and bad guys are clear. no PC, unlike the newly released American Assassin movie that I feel was changed to fit political correctness. The title could be changed to American Terrorist.

Other then a some unnecessary language it is a great book. I really enjoyed it.

I have been listening to the Mitch Rapp series and this was my favorite book so far! I thought it was great. I was really nervous about the narration based on some of the reviews I read, but I thought he did a great job. Once you got used to hearing a different voice, you forgot about the other narrator.

Didn't realize this was an abridged version until it was already downloaded. Wish the full version was available as I believe this was one of the best Mitch Rapp books out there. Way too many details and character development left out. Pretty sure the connection made between Rapp and his future wife is a pretty important event.

Great story, disappointed with the abridged version. I enjoy Vince Flynn's writing and would have liked it better in the unabridge version.

It's another good story, but being abridged keeps it from being better. I wish there were no such things as abridged books.

Vince Flynn could not have created a better character than Mitch Rapp. The books in this series is current and I wish we had the nerve to do the things Mitch Rapp does. I think I am in love with Mitch Rapp.

I have read all the vince flynn books and am now listening to them. Having already read them though, only being able to get the abridged versions is pretty disappointing. You would think a website like this would have the unabridged versions available.

This was very good in terms of character, story and suspense. I just wished it had been unabridged as I felt it skipped along to the conclusion pretty quickly. I usually choose unabridged, but when unavailable some abridgements are so well done you don't notice, but this was noticably shortened. I have read other Mitch Rapp books and enjoyed learning how he met his wife.

This audio left out an unbelievable amount. The book was much tougher on Democrats. Book was more realistic.

Vince Flynn is a great writer. I really enjoy Mitch Rapp and I agree with a previous reviewer who said he would fill in well for Jack Bauer on "24". I have now listened to two of Vince Flynn's books . . . this one and Consent to Kill . . . and enjoyed them both immensely. My only regret is that I listened to the latest one first!

I have read Consent to Kill before, loved it so decided I would read the other Vince Flynn books - this is a good one, starts a little slow but picks up quickly. If you like Mitch Rapp's character you'll like it.

This title is due for release on May 3, 2011
We'll send you an email as soon as it is available!