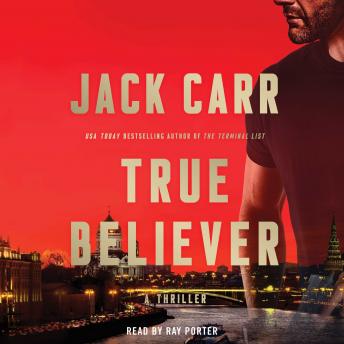 In #1 New York Times author Jack Carr’s follow-up to The Terminal List, former Navy SEAL James Reece’s skill, cunning, and heroism put the US government back in his debt and set him on another path of revenge.

When a string of horrific terrorist attacks plagues the Western world during the holiday season, the broader markets fall into a tailspin. The attacks are being coordinated by a shadowy former Iraqi commando who has disappeared into Europe’s underground. The United States government has an asset who can turn the Iraqi against his masters: James Reece, the most-wanted domestic terrorist alive.

After avenging the deaths of his family and team members, Reece emerges deep in the wilds of Mozambique, protected by the family of his estranged best friend and former SEAL Team member. When a series of events uncovers his whereabouts, the CIA recruits him, using a Presidential pardon for Reece and immunity for the friends who helped him in his mission of vengeance.

A high-intensity roller-coaster race against time, True Believer is “one of this year’s hottest thrillers, and a perfect fit for fans of Vince Flynn, Brad Thor, and Daniel Silva” (The Real Book Spy).

I can’t help but think the entire time that this could really happen. Great book and great underlying messages.

I love all things Jack Carr

just the right amount of foreshadow, and a great narrator

It really makes you think about the enemies we have have created and what true believers are out there that really hate the USA. Great storyline and scary believable. The narrator does a great job as usual with so many characters of different sexes and different nationalities.

Am sure Jack is a tru patriot, but he should stay in his lane, and good storytelling is not it...

As his first book, very detailed and lots of action at every chapter

Love them. These are so darn good

Fantastic book. Needs to be a movie.

Another great James Reese adventure. Carr has created a character that will continue to give readers a great ride for a long time. The reader also did a fantastic job.

Had me intrigued the whole book great read

Fun plot but low brow. Depictions of women and Africans are patronizing and, at times, gross.