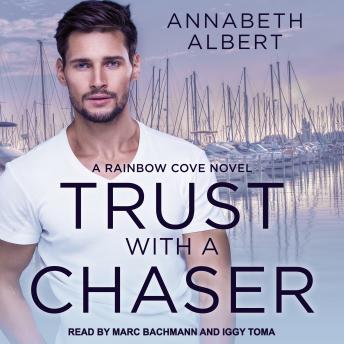 Trust with a Chaser

One hot cop. One bar owner out for redemption. One smoking-hot summer fling destined to leave scorch marks . . .

Mason Hanks has returned to Rainbow Cove, Oregon with one goal in mind: turn the struggling coastal community into a thriving LGBTQ tourism destination. Step one is transforming an old bar and grill into a gay-friendly eatery. Step two? Don't piss off Nash Flint, the very hot, very stern chief of police who's not so sure he's on board with Mason's big plans.

Nash Flint just wants to keep his community safe and enjoy the occasional burger in peace. He's not big on change nor is he a fan of Mason's troublemaking family, especially his rowdy older brothers. But Mason slowly wins him over with fantastic cooking and the sort of friendship Nash has been starving for.

When their unlikely friendship takes a turn for the sexy, both men try to steer clear of trouble. Nash believes he's too set in his ways for Mason, and Mason worries that his family's reputation will ruin any future with Nash. Burning up the sheets in secret is a surefire way to crash and burn, and discovery forces a heart-wrenching decision-is love worth the risk of losing everything?