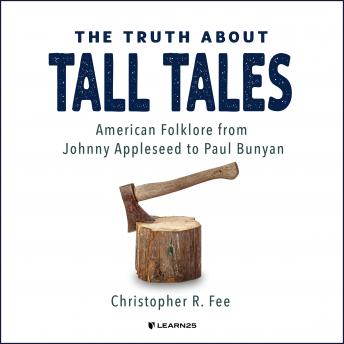 The Truth About Tall Tales: American Folklore from Johnny Appleseed to Paul Bunyan

What can we learn about our culture from the stories we tell? Join master presenter Christopher Fee to learn what our heroes and monsters - both real and imaginedÑhave to tell us about who we are as Americans.

American folklore is as vibrant and diverse as Americans themselves. Some tales offer embellished accounts of real historical figures, and in others, figures are invented to serve a cultural or commercial purpose. Often didactic and always fantastic, in one way or another these tales help us make sense of the world.

Join Christopher Fee, coeditor of "An Encyclopedia of American Myth, Legend, and Folklore," for an entertaining and revealing look at our nation's folkloric imagination. In this compelling 24-lecture audio series, you'll meet figures such as Daniel Boone and John Henry, and learn the stories of characters such as Water Jar Boy and the Woodcutter and the Fairy. Specters also abound, and you'll encounter frightening figures ranging from the Headless Horseman to La Llorona.

Having explored traditional forms of folklore, myth, and legend in America, you will turn to new storytelling methods, discussing genres such as conspiracy theory, urban myth, and 'fakelore.' Finally, you will conclude by asking how these kinds of stories represent a search for deeper truths, which suggests why American folklore still matters so much to so many.

This is a great lecture series. It does not read like a book, but has great information