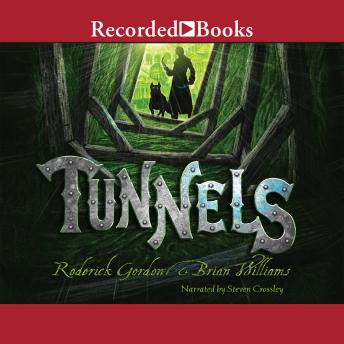 Originally self-published, this riveting fantasy became the stuff of legend before catching the attention of the publisher who discovered J.K. Rowling. Soon after it was optioned for a major film. When 14-year-old Will Burrows goes looking for his missing father, he discovers an underground world that time forgot. Ruled by a brutal class called the Styx, 'The Colony' has not changed in a hundred years. Into this dark and mysterious place go Will and his friend Chester, unsure what they will find and oblivious to the dangers ahead. Before long their extraordinary adventure unearths a terrible secret-one that may cost them their lives. Hailed as the next big thing in fantasy literature, Tunnels grips the imagination while making readers think twice about the ground beneath their feet. Narrator Steven Crossley captures the authors' unique vision with his captivating performance. 'Gordon and Williams will soon have legions of fans. Tunnels is just the beginning.'-Guardian (UK)

This title is due for release on February 18, 2008
We'll send you an email as soon as it is available!