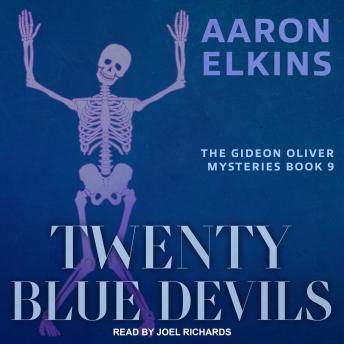 The dead man is the manager of Tahiti's Paradise Coffee Plantation, producer of the most expensive coffee bean in the world, the winey, luscious Blue Devil. Nothing tangible points to foul play behind his fall from a cliff, but FBI agent John Lau, a relative of the coffee growing family, has his suspicions. What he needs is evidence, and who better to provide it than his friend, anthropologist Gideon Oliver, the Skeleton Detective? Gideon is willing to help, but surprisingly-and suspiciously-both the police and the other family members refuse to okay an exhumation order. As a result, Gideon, to his surprise and against his better judgment, finds himself sneaking into a graveyard under cover of night with John, a flashlight, and a shovel.

Gideon prefers his bones ancient, dry, and dusty, but the body he must examine had lain in the tropical sun for a week before it was found and then buried native style-shallow, with no casket-so it is not exactly his . . . well, cup of tea. But it is not the state of the remains that bothers him the most, it is the deeper human ugliness that his examination uncovers: subtle clues that do indeed point to foul play, to mistaken identity, and to a murderous conspiracy that may have percolated through the family for decades-and brewed a taste for murder.